A fleeting reappearance of plague exposes India's lack of preparedness 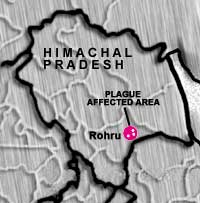 THE contagion appears to have been contained before it could assume epidemic proportions. But it has still claimed four lives.

The recent outbreak of plague in the Rohru-Jubbal belt of Himachal Pradesh (HP) highlights how a surveillance mechanism is conspicuously absent in India. While the disease is said to have reared its head in the hill state for the third time in less than 20 years, not even a decade has passed since it struck Surat. Clearly, lessons have not been learnt from the past.

The scourge revisited HP on February 5, 2002, when the first case was reported. However, it took the four-member team of the National Institute of Communicable Diseases (NICD) 14 days to confirm the disease as "plague". The state authorities were caught napping even though the region is endemic to the disease (see box: On the rat track), and the Union government stepped in only when one person fell prey to it in neighbouring Uttaranchal.

Experts dubbed it as a wild or sylvatic plague, which exists in nature independent of human population and activity. Human beings contract this form of the disease only occasionally when handling an infected animal. The theory doing the rounds is that the pathogen was transferred to the first victim from wild rodents when he went to the forest to hunt. Plague is caused by a bacterium, Yersinia pestis, which is transmitted by a rat-flea bite to humans (see box: The pathogen behind plague).

Ironically, state health minister Jagat Prasad Nadda toured the affected area 12 days after the first person with plague-like symptoms was admitted to an understaffed and ill-equipped civil hospital in Rohru. Several patients were later taken to Indira Gandhi Medical College (IGMC) and Post-Graduate Institute of Medical Education and Research (PGIMER), Chandigarh. Ram Lal, the senior medical officer at the Rohru hospital, says he had informed doctors of IGMC and PGIMER that it was pneumonic plague. But he was told to exercise restraint.

On February 12, the preliminary microbiology report of samples taken from a patient admitted at IGMC revealed that she was carrying the plague bacterium. At PGIMER, three patients were diagnosed to have bacterial growth. However, it was contended that confirmation of the bacteria at the molecular level was essential and only NICD possesses the know-how to carry out such tests. It was, therefore, left to the NICD to deliver the final verdict.

Two days later, a team of experts from the NICD collected blood and sputum samples. Though there was sufficient evidence that the samples had tested positive for plague, on February 16 NICD director Usha Baveja said dismissively that there was no necessity for putting into place an emergency action plan. It was only on February 19 that the official confirmation was made by Union health minister C P Thakur. By then, 17 cases had been reported. An acute shortage of antibiotics such as doxycycline and tetracycline in the civil hospitals made matters worse. Last heard, two more suspected plague cases were reported from Chandigarh.

To be sure, the damage control exercise did pick up steam after a sluggish start. Schools in Himachal Pradesh were closed. Leave granted to all doctors and paramedics stood cancelled. Loudspeakers were used, urging people to restrict their movement and minimise contact with each other. Later, villages in Uttaranchal were quarantined. Despite these precautions, a pall of fear hung over the area with people wearing masks to keep the scourge at bay.

Satnam Singh, director of Regional Institute of Public Health, a non-governmental organisation (NGO), feels that the people should have been warned about the possibility of a plague epidemic since HP lies in a plague-prone zone.

In fact, the state has witnessed bouts of plague during the late fifties and early sixties. In September 1983, 18 people succumbed to an unidentified disease in Tangnu village in the state. A team from IGMC had then visited the Rohru hospital to study the patients. D J Dasgupta, former IGMC principal, says, "The patients were found to be carrying the plague bacteria. But the report submitted by the team was never released."

N Devadasan, national professional officer, communicable diseases, World Health Organization (WHO), feels that regular monitoring of the susceptible areas is the only way out. In fact, the NICD had recommended formation of a plague surveillance team for the area in 1984. Consequently, the state had established a special set-up that was assigned the task of combing the forests to detect any presence of plague. The mechanism was, however, dismantled a decade ago due to a fund crunch.

"As the area did not have a plague incidence for a long time, surveillance was stopped in HP," says Baveja, adding, "We will now emphasise more on regular monitoring and ask the states to set up centres for surveillance in collaboration with us." At present the central plague laboratory located in NICD, Delhi, has a plague surveillance unit at Bangalore, which monitors only three states.

S J Rehman, former head of the department of medical entomology and vector control at NICD, says, "There is need to have more such units. The country should be divided into geographical zones and both serological and pathological tests should be carried out to confirm the presence of the disease in rodents."

Listing out future plans, Thakur says: "In the next five years, we will set up 563 surveillance centres all over the country for immediate reporting of all infectious diseases." Unlike in the past, district networks will now be inter-linked to ensure coordination, reveals health secretary Javed Chaudhery.

The people of Rohru should consider themselves fortunate. Though Thakur and his team are likely to take all the credit for containing the current outbreak, the toll could have been higher had it not been for the inclement weather. It is felt that the extreme cold actually came to the people's rescue by confining most of them to their homes. This prevented the plague from spreading rapidly and did not allow further transmission.

The grim memories of the 1994 Surat scourge - where there were over 800 cases of presumed plague - are still etched in the minds of people. This was evident from the signs of incipient panic across the nation when news of the affliction in Rohru broke out. But judging from the authorities' sluggish response, they appear to have forgotten.