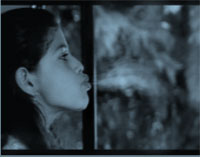 Three new ads are being distributed to television stations and movie houses around India, but they aren’t selling anything, per se: rather, each offers a 30-second snippet of a larger anti-vehicular pollution campaign. The ads are the winners of an annual theme contest by the Delhi-based Earth Communications Office (ECO). ECOIndia and its US-based parent are nonprofits working to bring the entertainment and advertising industries together with environmental concerns. In one spot, viewers sit through ominous wheezing, coughing, gagging audio, before being reminded: “Even vehicular smoke kills”. In a second, a young girl sitting at a traffic stop with her mom rolls down the window and takes a surreptitious drag of the outside smog, looking blissfully naughty even as her mother smiles benignly at her. The text reads: “Would you allow your child to smoke? The traffic pollution in your city does”. These reminders of the ignored nature of automobile pollution are laudable. In perhaps the most effective of the three, a husband and pregnant wife stroll down a city sidewalk, surrounded by chirping birds, crickets, and the very distant hum of traffic. When the expectant mother sits to rest, the husband puts his ear to her belly and hears a hacking cough. As he looks worriedly at the large road nearby, traffic noises suddenly overpower the previously tranquil setting. The message is clear: just because you don’t think about it, doesn’t mean it isn’t there. But a commercial is meant both to inform and to motivate. The only quasidirective that these ads include is ECOIndia’s website address — a site that may or may not include additional tips on combating these issues, but was inaccessible at deadline. Without specific advice, one is left to wonder if the best reaction to these problems is simply to stay inside and button shut all of the windows. 