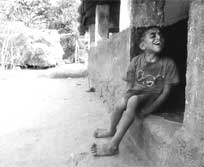 The aerial spraying of the endosulfan pesticide has been temporarily banned in many parts of the Kasaragod district of Kerala. The district collector, C K Visvanathan, on August 9, 2001, passed an order to this effect in response to a memorandum submitted to him by the Endosulfan Spray Protest Action Committee (espac). "In the wake of reports submitted by three expert teams the order of prohibition has been passed. It will remain in effect until further studies are conducted," said Visvanathan. Even the National Human Rights Commission (nhrc) has initiated an inquiry into the matter. The nhrc inquiry is a result of complaints filed by the villagers of the district. The commission has asked the Indian Council of Medical Research (icmr) to serve notices to the Union government, the chief secretary of Kerala and the state's ministries of agriculture and health.icmr has also directed a team of doctors to conduct an in-depth study in the matter.

Due to the spraying done by Plantation Corporation of Kerala (pck) on its cashew plantations, many residents of the district are suffering from ailments such as cerebral palsy and epilepsy (Read: Down To Earth , Vol 9, No 19, February 28, 2001). Laboratory tests conducted by the Centre for Science and Environment, a Delhi-based non-governmental organisation, confirmed the presence of endosulfan in the samples taken from the village. The Central Insecticide Board, which regulates aerial spraying across the country, alleges that pck undertook the spraying without its permission.