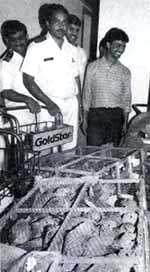 A MAJOR bird-smuggling racket was literally uncovered on the tarmac of New Delhi's Indira Gandhi International Airport. Just before four "abnormal" packages wrapped in gunny were loaded on to a Pakistan International Airlines flight for Dubai, curious customs officials pounced on them and found that they were packed with more than 1,300 live birds. The owner of the packages, Salim Ahmed Khan, 18, from Rampur in Uttar Pradesh, was tracked down and roped in for interrogation before he could board.

The birds, worth Rs 4 lakh in the international market, were mynahs, munias and parrots, and included such exotic species as the Alexandrine Parakeet and the Hill Mynah. Wildlife officials later expressed apprehension that India might be turning into a transit point, like Brazil and Peru, for smuggled birds.