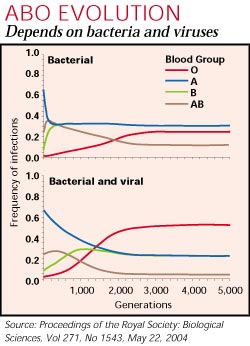 ever wondered why people have different blood groups? A study shows that blood groups evolved to confer upon humanity defence against viral and bacterial diseases. Humans either have blood group a, b, ab or o. Each type occurs at different frequencies across the world. Robert Seymour and his colleagues from uk's University College London (ucl) recently developed a mathematical model to show that this diversity is an offshoot of pressures on vertebrates to generate diversity to combat pathogens.

As per the results, published in the Proceedings of the Royal Society: Biological Sciences (Vol 271, No 1543, May 22, 2004), if viral infections dominate a population, blood type o will be most common. But if bacterial diseases are more widespread in an area, then a and b blood types will be frequent. The results are in tandem with the variations seen in populations worldwide, claims Seymour. Typically, 42-58 per cent of the African population has o group, 21-29 per cent has a, 16-26 per cent has b and 2-6 per cent has ab. The pattern is similar among Southeast Asians. Europeans and other Asians, in contrast, tend to have less o, but rarely below 30 per cent. Among them, a varies between 20-48 per cent, b 5-36 per cent and ab 1-10 per cent. Amerindians and many other isolated populations have high o phenotypes (54-100 per cent), and a correspondingly low a, b and ab frequencies.

According to the researchers, over the generations, viral infections increase the frequency of type o due to antibodies present in the blood. People with type a blood produce anti-b antibodies, those with type b have anti-a antibodies and populations having type o have both. But people with type ab have none. The production of antibodies affects the transmission of viruses. The researchers explicated this phenomenon with the example of measles viruses, which pick up a chemical signature specific to each blood type as they burst out of infected cells. They do this by copying patterns of sugar molecules attached to cell surface proteins. But this makes the viruses susceptible to attack by antibodies in people with a different blood type.

The researchers found that viruses emerging from type a and b cells are neutralised by type o blood because it contains antibodies to fight against molecules carrying signatures of type a and b. But a or b blood are unable to counteract viruses emerging from type o cells. When the team cross-checked these findings with their help of the model, they found that type o people are good at transmitting viruses to people with a or b blood types. Moreover, they are also better protected from viruses that had infected type a, b or ab individuals (see graph: ABO evolution).

At a glance, these results imply that if viruses were the sole source of diseases, only type o people would survive in the long run. "But that isn't the case," Seymour says, adding: "Type o also has limitations like a, b, and ab." According to him, bacterial infections restore the balance. To infect humans, bacteria have to adhere to the sugars on some cells of the epithelium (tissue forming the outer layer of the body). These sugars are specific to each blood group. The model showed that bacteria evolve to attach to sugars specific to the dominant blood type. So bacteria tend to infect people with type o in populations when the blood group becomes most common. In order to escape the bacterial attack, the susceptible population evolves to have blood group a, b or ab. Thus, the blood variation is maintained.

"The results are compelling," says John Martinko, an expert on blood groups at the Southern Illinois University, usa. But he says the model does not answer a key question: abo blood groups evolved at least 13 million years ago in common ancestors of great apes and humans, and the sugar molecules associated with the blood types have not changed much since then. If blood groups are a defence against infections, it's a mystery why abo molecules have not changed at all when bacteria and viruses are constantly mutating.