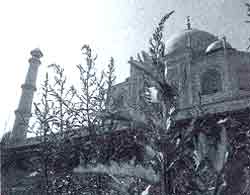 Even as the Uttar Pradesh government faces a barrage of criticism for its otherwise lacklustre performance, it has undertaken an impressive afforestation programme that state forest secretary Mohinder Singh says is aimed at reducing environmental pollution in urban settlements. During 1993-94, 400 million saplings will be planted in select towns in the state.

Singh says the tree species to be planted around Lucknow will be chosen for their "anti-pollution" qualities, and will include the peepal, bargad and ashok. The forests will be named after the groups that plant and nurture them: Doctors will be responsible for the Chikitsa Van, children will look after the Bal Van, while journalists, teachers and lawyers will take care of the Sadbhavna Van.

The state forest department has also drawn up plans to provide the Taj Mahal with a green cover to protect it from atmospheric pollution. This will entail the creation of a 82-ha forest near the monument.