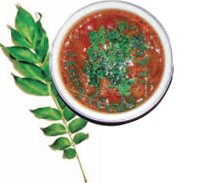 CURRY leaves do more than lend spike to food. Add them to the list of drugs that control type 2 diabetes. People who cannot digest fat-containing foods have high levels of free fatty acids (FFAs) in the blood. Increase in blood FFAs reduces glucose uptake and leads to type 2 diabetes. Insulin initiates the entry of glucose into cells with the help of insulin receptors (IRs)—a protein which sits on cell surfaces. In type 2 diabetes, this does not happen. When curry leaf extracts showed promise in countering the disease, researchers were excited. But they could not lay their hands on the elusive compound. Researchers from the Visva Bharati University in Santiniketan and the Indian Institute of Chemical Biology in Kolkata tested each chemical present in curry leaf extracts and finally hit on one. “The molecule was identified as mahanine. Its anti-diabetic role was not known and our report is a novel one”, said lead researcher Samir Bhattacharya from the Visva Bharati University. The group tested the effect of mahanine on cultured muscle cells derived from rats and on diabetic hamsters. When the muscle cells were treated with insulin plus palmitate (FFA) in the presence of mahanine, the effects of the FFA were reversed. The team then treated the cells with insulin plus palmitate without mahanine and saw the opposite happen. “Owing to a fat-enriched diet for a prolonged period there was a two-fold increase in blood sugar levels in the hamsters. These levels were controlled by mahanine treatment,” said Bhattacharya. The October 14 issue of Molecular and Cellular Biochemistry reported the find. The FFAs hamper the activity of a gene that directs the production of the IR proteins. Hence even though insulin is released in sufficient quantities, there is not enough IRs to facilitate the entry of glucose into cells. Bhattacharya said mahanine restores the IR gene’s activity. Mahanine is destroyed when curry leaves are cooked. So how would the curry leaves help? Tuhin K Biswas of J B Roy State Ayurvedic Medical College in Kolkata said: “The finding would help find new drugs. It would be better to have detailed clinical trials.”