Can microcircuits "grow" by themselves? In a few years, they just might 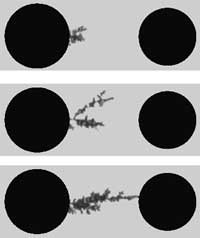 if you want to pack in more circuitry into an electronic gadget - and in the world of electronics, more is almost always better - you have to use smaller and thinner wires. Electronic engineers have many new tools with which they can do all this and perhaps, more. Microsoldering and photolithography are just two methods that have proved phenomenally successful. But both are also pressing against all known limits. To keep computer sophistication racing forward at its rocket-sled pace, semiconductor outfits will need a fundamentally new way to build ever-denser microcircuitry.

Enter Jean Claude Bradley, a chemist at Drexel University in Philadelphia, usa, who thinks he has found one such way. And if his techniques work, then years form now, they could be used to make microprocessors that would look more like cubes than chips (Scientific American , Vol 277, No 5).

The first step, however, was nothing extraordinary. Bradley and his teammates made two copper wires to light up a tiny bulb. But what was interesting was the fact that the team did not use any of the standard "hi tech" equipment for building microcircuits: no robot-controlled soldering pens, no ultraviolet lamps or light-sensitive acid washes to etch micron-sized wires and no marvellously-detailed printing plates to stamp out intricate circuit patterns. No. Bradley used markedly "low tech" gear which, he claims, can be bought off the shelves of any electronic store. He took a simple project board that was covered with a grid of holes, each capped by a copper ring. He covered two adjacent rings with a single drop of water, then stuck platinum electrodes into the bottom of the holes so that they were close to, but did not touch, the rings. These electrodes were plugged into the rough equivalent of two nine-volt batteries. Almost instantly, a branch of copper began growing from one ring towards the other. And within 45 seconds, the wire completed the circuit.

"This is probably the first instance of constructing circuitry simply by controlling an electrical field," Bradley claims. "You don't need to touch the copper rings in any way." Indeed, Bradley reported that his lab has grown finer wires less than one micron in thickness - nearly as thin as the wires in the computer chips - between copper particles floating freely in solvent. But it will take much more work before complex microcircuits can be "grown" using electrodeposition.

Bradley says electrochemists can explain, though not very clearly, why this process works. The voltage applied to the platinum electrodes creates an electrical field that surrounds the two copper rings. This electrical field polarises the copper: it forces the positive charges to one side and the negative charges to the other. Opposites attract, and in a strong field, the opposite edges can attract so strongly that the electrical force will rip copper atoms off one ring and dump them into the water-filled gulf between the two. Once enough copper atoms are in the water, they begin to coalesce into a thin copper wire. This grows until it contacts the other ring and creates a conduit that nullifies the voltage difference between the two rings.

That explains why the wires grow, but Bradley admits that many mysteries about the phenomenon will have to be solved before this process can be actually used to create more intricate and useful circuits. For instance, the wires form branching tree-like structures. Smooth wires conduct higher currents and higher frequency signals more readily. And computer logic is made from semiconductors such as silicon, as well as conductors such as conductors such as aluminium. Bradley thinks that smooth semiconductors circuitry can probably be made by using different materials and solvents and by strengthening the electrical field. But this, he says, is yet to be proved.

Perhaps more crucial, electrochemists still need to demonstrate what Bradley claims is "the technique's real potential: to construct truly three-dimensional circuits." Acid etches, soldering guns and printing plates work well only on wafer-like flat surfaces; that is why conventional microchips are so thin. However, if metal particles are suspended within a porous cube, Bradley speculates, one could then use a beam of polarised light or a mesh of electrodes to generate minute electrical fields and thus grow wires that run up and down as well as to and fro.

Now that Drexel has applied for provisional patents, Bradley has begun looking for industrial partners to bankroll the next step in his research: to make circuits that are as tall as they are broad.