As the menace of AIDS spreads in India, there is an interest in traditional cures 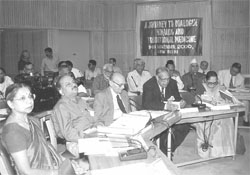 the first case of aids in India was reported in 1986. Today, there are more that 3.7 million patients -- equalling that of South Africa. Yet, the country has not formulated an integrated policy on aids treatment. "There have been few rigorous clinical trials in the country and fewer still have been in the field of aids," says Q B Saxena of the Indian Council for Medical Research, New Delhi. Keeping this in mind, a conference was held in New Delhi recently to highlight the traditional cures from different parts of India to combat the deadly hiv virus.

Organised by the Delhi Society for the Promotion of Rational Use of Drugs (dsprud) and the uk-based Global Initiative for Traditional Systems of Health (gifts), the conference sought to "serve as a forum to share experiences and efforts being made to combat the disease through alternate medicines."

Though Africa suffers the maximum burden of the disease, it was felt that the disease could soon assume alarming proportions in India, too. In countries like Kenya, around 80 per cent of the beds cater to only aids patients. "At the present rate of disease incidence, India will surpass Africa in another decade," warns G Bodeker, chairperson of gifts. Maharashtra, Tamil Nadu and the Northeastern states have reported the highest number of aids cases. "A rapid research response is the need of the hour," adds Bodeker. "One has to look at traditional medicine for a parallel approach to aids cure, but the awareness is still missing," added Shailaja Chandra, secretary, department of Indian systems of medicine and health.

Traditional medicine is showing some results. A success story has been registered by S Rohatgi in Kanpur, a practitioner who has been trying to treat patients suffering from aids, tuberculosis and polio through traditional medicine. One of his patients, a seven-month pregnant woman was put on immunopotentiators -- drugs that enhance immunity -- as soon as she was detected as hiv positive. The infant was also hiv positive and was put on the immunopotentiators immediately after birth. After three months, the child was detected as hiv negative.

Another effort is underway in Gujarat for the past few years now. Two medical colleges in Surat and Jamnagar have promoted the use of traditional medicine for treating hiv positive people. This is part of a project being sponsored by the Gujarat government and has involved the traditional practitioners of the area. Another effort is being made at the Tambaram Sanatorium in Chennai, where the ancient Siddha system of medicine is being used to treat aids patients. "But there is a long way before traditional medicines get due recognition," says Ranjit Roy Chaudhury, president of dsprud. While the number of patients increase by the day, some questions need to be answered. Rigorous clinical trials have to be carried out, a dosage decided and quality control ensured, feel experts.