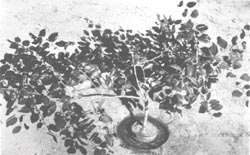 the crisis over the availability of water for humans has never assumed graver proportions than during present times. It is, therefore, natural for scientists to think of conservation and efficient utilisation. With respect to the flora, obtaining water for a handful of plants does not pose a problem. The dilemma arises when they are growing in large numbers. For desert plants, it is not just a matter of acquiring this precious resource, but to conserve and utilise it prudently is even more important. However, even if the plants do manage to get water, most of it is lost through evaporation, percolation and seepage. Under these circumstances plant mortality increases and very few plants survive.

Considering all these problems, there has been a need for a new technique that could reduce the frequency of irrigation, as well as the total amount of water applied during the establishment of plants. The Central Arid Zone Research Institute ( cazri), Jodhpur, has developed a novel technique to facilitate early establishment of trees. The technique makes use of a double-walled pot. The diameter of the outer pot is approximately 25 cm at the top and 18 cm at the base. (Since the device is made on the potter's wheel there may be some variation in these measurements). The diameter at the top and base of the inner pot is about 15 cm and 12 cm. Both the pots are joined at the base, such that the basal portion of the inner pot is open to permit the growing roots to pass through.

A tree sapling along with soil is transplanted in the inner pot. The space between the two pots in filled with water and covered by a polythene sheet to avoid direct evaporational losses. The outermost wall of the device, jaltripti , is painted with coal-tar, cement or some other paint to prevent seepage of water. However, the suction force created by the soil in the inner pot and the plant roots requiring water maintains a steady internal seepage of water. The seepage takes place through the minute pores in the wall of the inner pot. This keeps the soil sufficiently moist for plant growth. Water is filled in the space between the pots and the circular surface of water is covered with a polythene sheet or earthen lid. Refilling can be done at weekly, fortnightly or monthly intervals depending on the season and size of the pot.

The savings in transport costs, reduced quantity of water needed and less wages to be paid to the labour are obvious advantages of this technique. However, there are many other advantages. The per unit cost of the device is very low, since all the material needed for its preparation are cheap and easily available. The amount of fertiliser, insecticide, pesticide, etc. required is also reduced. Fertilisers like urea when dissolved in water will become available to the plants slowly through the soil and there will be no danger of toxicity due to low moisture conditions nor will the fertiliser go waste due to water percolation losses. This technique reduces wilting and transplantation shock and increases plant survival by maintaining a regular supply of moisture.

- Economy of water (80-90 per cent). It saves water even more than drip and sprinkler systems;

- Percolation, seepage and evaporation are checked;

- A well-regulated supply of moisture.

- Material is indigenously available and inexpensive. It reduces wilting and translation shocks and survival is cent per cent;
l Growth rate of plants is faster;

- Plants can be raised in situ, thus too much use of undegradeable material like polythene can be avoided;

- It reduces the amount of fertiliser, insecticides, pesticides, amendment etc. And helps in their regulated release. Their wastage is also checked;

- Weed infestation is minimised due to limited water zone;

- It is effective in stabilising sand dunes because of its heavy base;

- Soils which are excessively waterlogged, saline, alkaline or gravelly up to a depth of 30 cm can also be afforested; and

- It will help in increasing rural employment and ensure speedy improvement of the environment.

Keeping in view the needs of the ordinary farmers or the amateur interested in raising a nursery in areas having only saline water, a novel device jalshuddhi has also been developed by cazri scientists. It is a double-walled earthern pot with the bottom of the inner pot open. The diameter of the outer pot is about 25cm at the top and 18 cum at the base, while the inner pot is 15 and 10cm. The height of the outer pot is 30 cm, while the inner one is 27 cm. After saline water is filled in the annular space between the two pots, it is capped with a funnel shaped transparent polythene sheet, such that it is embedded up to 2.5 cm in the soil-contained in the polythene bag in the inner pot.

The device works on the simple principle of condensation. The water evaporating from the annular space condenses on the polythene cap, which slants towards the inner pot, the condensed droplets then slide down to the soil present in the inner pot. The moisture thus supplied to the soil is completely full of soluble salts.

The outer surface of the external pot is made impervious by curing it with cement or painting with enamel. The saline water is filled in the annular space between the pots. A polythene bag filled with nursery mixture is placed in the inner pot and the seed is sown in it. The use of polythene bag helps to avoid direct seepage of saline water to the soil. The funnel shaped polythene cap is now placed over the pots such that a part of it is around the brim of the outer pot while the central portion is embedded in the polythene bag of the inner pot. Make the margin around the brim of the outer pot air-tight, otherwise the condensation will not be effective.

The saline water once filled will keep on providing fresh water to the seed for about 10 days. As the seed germinates and grows, the water requirement will increase, which may necessitate a relatively early refilling.

By adopting this technique, afforestation in desert areas become easy even when water is scarce or saline. Germination and sapling growth of even sensitive plants, particularly, horticultural ones, will now be possible in areas having saline water. The device is cheap and as the irrigation frequency is very low there is saving on labour. The polythene caps are reusable. Above all, the device can be easily used by an ordinary farmer.

- Germination and sapling growth of even sensitive plants is possible in areas having saline water;

- Desalination and irrigation is done simultaneously;

- The device is inexpensive. As the irrigation frequency is very low, it saves on labour;

- The polythene caps are reuseable; and

- Can be operated easily by a farmer.

These novel devices have been developed for growing trees in arid regions. They are inexpensive, simple to operate and do not require energy but at the same time utilise every drop of water. They could prove to be a boon for small and medium farmers of arid and semi-arid regions which occupy about two-thirds of the world.