Gruelling days ahead at WHO for Nakajima

Allegations of financial irregularities are likely to be highlighted at a crucial session scheduled shortly in Geneva. 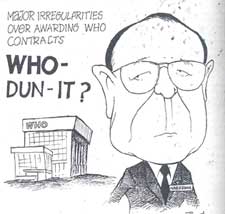 HIROSHI Nakajima, newly re-elected director general of the World Health Organisation, could face a demand for his resignation at WHO's annual assembly in May in Geneva, unless allegations of financial irregularities are resolved.

Nakajima won a hard-fought campaign in January for a second five-year term. Eighteen of WHO's 31-member executive board voted in his favour, 13 for his former deputy director-general, Mohammed Abdel-moumene of Algeria, and none for Nigerian health minister Ilikoyo Ransome-Kuti.

However, reports have surfaced since of major irregularities over the awarding of WHO contracts. Executive board president Jean-Francois Girard of France says he was informed of these reports by WHO's counsel and they should be reviewed by an independent panel.

Of significance is a US $150,000 contract awarded to A R A Bengzon, the Philippine delegate on the executive board, to write a history of health care under former Filipino president Corazon Aquino. WHO's internal auditor, Helge Larsen, alleged in a confidential memorandum leaked to Associated Press (AP), that "the amount seems totally out of proportion to the services to be rendered." A further allegation was that the correct procedure was not followed in awarding the contract.

Bengzon, a former health minister, was the architect of his country's policy on pharmaceuticals. Denying that there was anything "irregular" about the contract, he told the Manila Times that in supporting Nakajima he was merely carrying out Manila's instructions.

But the Sierra Leone delegate, G Komba-Kono, went against his government by voting for Nakajima and not for Ransome-Kuti, whom he had nominated. Komba-Kono lost his government job, but the AP reports he was offered a WHO post in Bangladesh but has not been able to accept it because of protests by other WHO officials.

Even before the Nakajima election, senior WHO staff and diplomats from the major donor countries had expressed concern over campaign tactics. With Japan being the only industrialised country supporting Nakajima re-election, the race was on to secure the votes of Vote for the developing countries. Questions are now date who being raised about an offer from Nakajima to nominat the presidents of Senegal and Mexico to attend an international meeting in Rome as his "special guests".

An editorial in the British medical journal, The Lancet, written before the revelations about contracts and jobs, described the WHO election as an "undignified scuffle" and went on to describe Nakajima's first term as a "lacklustre performance". The journal urged Nakajima "to Leone show that he has a coherent and credible did not policy for tackling the manifold health problems that face the world".

The latest revelations have heightened speculation that the WHO assembly next month may take the unprecedented step of rejecting the board election. Nakajima has promised pro-election contracts will be fully audited before the assembly meets, but this may not be enough to restore morale at WHO or confidence among its main donors.