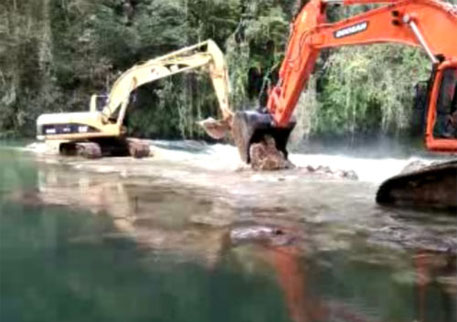 Dams have always been in the news, but mostly for the wrong reason. If governments see it as a source of hydropower generation, people in the vicinity affected by it consider it a scourge of development. The Santa Rita dam in Guatemala, central America, is no different. Touted as a “green dam”, the hydro project has terrorised the Mayan community by abusing their rights, according to the Guardian. But the more shocking news is that protests against the dam have led to the killing of six indigenous people, including two children.

The report cites human rights groups, which back claims from the community that they were not consulted about the project. The mega dam, which will reportedly generate 25 megawatt (MW) of energy, will displace thousands of people. In a letter to the United Nation’s Clean Development Mechanism (CDM), which registered the plant, the People’s Council of Tezulutlaâ• Ã¼n outlined a litany of rights violations, including kidnappings, evictions, house burnings, attacks by men wielding machetes and guns and the arrest of community leaders. The council claims that an environmental impact assessment for the dam suggests that it would create a 12-metre high wall, which would flood the villages in the vicinity and deprive the local residents of water, food, transport and recreation, Guardian reports.

Tension surrounding the dam worsened last year in August when 1,500 police were sent to evict residents of Monte Olivo for construction work. Community representatives told Guardian that police fired tear-gas at people who had set up a peaceful blockade. Local residents further allege that officers stole animals, food, property and money from peoples’ homes, forcing families to take refuge in the mountains. Three indigenous people were killed in Semococh, a nearby town, during the operation. On August 23, two children were allegedly killed by a drunken worker of Santa Rita hydro electricity company.

“When a government criminalises opposition to such projects, it creates an atmosphere where this kind of violence against protesters, including extra-judicial killings, is more or less legitimised,” Heidi Hautala, a member of the European Parliament’s development committee, told Guardian. “These allegations are well-documented and it is outrageous that the UN’s CDM can register such projects that are clearly violating the human rights of indigenous people,” he added.

The Santa Rita dam has been funded by several European development banks and the World Bank’s International Finance Corporation (IFC). When Guardian approached IFC for comment, its spokesperson said that the project has only received funds. Currently “the project is on hold, as the fund manager discusses further with the local communities. Without strong local support, the project will not proceed,” the spokesperson said.