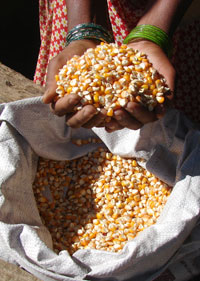 The Gujarat government has decided to withdraw multinational company Monsanto’s proprietary seeds from various ongoing government projects in the state. The decision is said to have been taken at a Cabinet meeting on April 25.

State agriculture minister Dileepbhai Sanghani was quoted by media saying the state government has decided not to procure Monsanto seeds that were being distributed among the farmers of tribal areas. The farmers would now be allowed to buy government approved/certified seeds of their choice; they would then be reimbursed the seed costs after they submit the purchase/receipt bills. According to the minister, the decision has been taken to break the monopoly of Monsanto.

Ministers and officials of the Gujarat Agriculture and Co-operation Department and the Tribal Development Department were not available for comments though repeated attempts were made to get in touch with them. Monsanto’s spokesperson, however, denies having received any “such information from the government of Gujarat”.

The Bharatiya Kisan Sangh (BKS) and Alliance for Sustainable and Holistic Agriculture (ASHA), which lobby to keep corporate interests out of agriculture, claim that the government had taken the decision following a recommendation by a cabinet sub-committee comprising Gujarat agriculture minister Dileepbhai Sanghani and tribal minister Mangubhai Patel; it was formed to investigate the seeds supplied by Monsanto for its pet programme—Project Sunshine. Under this scheme, the multinational’s Prabal brand of hybrid maize seeds are distributed to tribal farmers under a subsidy scheme.

In a press conference held at Ahmedabad on April 26, state president of BKS, Maganbhai Patel, and non-profit Jatan’s Kapil Shah said, “We have spoken to a minister in the Cabinet and he has apprised us of the development.”

Farmer activists say that since 2008 the state government has distributed Prabal to over half a million tribal farmers under Vanbandhu Kalyan Yojana (see 'The Monsanto Way', August 15, 2011). They claimed that the Gujarat government has spent around Rs 50 crore in the past four years to buy seeds from the company.

“The state government, by supplying poor tribal farmers with expensive seeds, was providing ready markets to the company,” said Patel, alleging that there was no transparency in the bidding process for buying maize seeds for Project Sunshine.

The activists said they had been trying for quite a while to convince the state government to drop Monsanto’s seeds.  “The choice of Prabal by the state government was against the opinion of agricultural scientists and there has been increasing opposition to it in the past few years,” they claimed.

In February 2012, ASHA had released a rapid appraisal report prepared after visiting several tribal farmers covered by Project Sunshine; the report pointed out several flaws in the project. In the last session of the Gujarat Assembly, questions had been raised about Monsanto’s seeds. “It appears that the government has finally followed the opinion of state agriculture universities on the appropriateness of Prabal for farmers in the areas where it is distributed,” says Shah.

A press release issued by ASHA and BKS says four maize scientists, including two former vice-chancellors, were asked to give their opinion on Prabal’s suitability. The scientists included M C Varshneya, former vice-chancellor of Anand Agriculture University, who is quoted as saying that Prabal was selected by tribal department without consulting research scientists. According to him, all state agricultural universities were not given a fair chance to supply its seeds.

However, Monsanto spokesperson said Monsanto’s Prabal maize hybrid seeds have been thoroughly tested at the Anand Agriculture University at Anand for more than three years and that it has consistently performed year on year, both in the University and on the fields of the 400,000 maize farmers who continue to plant the seeds in both rainfed and irrigated areas over the past four years.

He claimed that Monsanto’s Prabal maize hybrid seeds are safe and have adequately demonstrated value to thousands of farmers across India who plant them regularly. All seeds provided to the government and distributed through the rural trade channel are rigorously tested for quality, efficacy and meet the stringent standards prescribed by the government of India. “Every maize hybrid seed has been tested by our scientific team at our research breeding stations and by the state’s university systems, and at multi-location trials prior to commercial use,” the spokesperson said.

The press release of ASHA and BKS also quoted state government award-winning maize breeder, S N Goyal, saying, “Prabal is a late-in-maturity hybrid whose dent-type seed is unsuitable for majority of maize growing areas of Gujarat.” Among the reasons he gave was that most of the areas in the eastern part is rain-fed. For such areas early maturity varieties are recommended and not Prabal. Besides, this seed requires high inputs which are not desirable for rain-fed condition, especially for resource-poor farmers. Despite high dosage of NPK (nitrogen, phosphorous and potash) application to Prabal during Project Sunshine, marginal depletion in NPK and zinc levels have been observed in maize fields, which would result in soil deterioration in the long run.