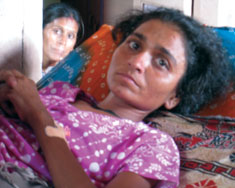 THE Gujarat High Court has asked the state government to survey all hazardous units and take stock of the safety measures in place for workers. The order follows a report by the National Institute of Occupational Health (NIOH) which found 30 per cent of the workers in a pharmaceutical unit suffering from lung failure due to overgrowth of tissues. In medical terms this condition is called pneumothorax with fibrosis.

Gujarat has around 410 major accident- and hazard-prone factories, the highest for any state in the country. The issue came to light after a Vadodara-based non-profit, Peoples Training and Research Centre (PTRC), wrote to the court seeking its intervention after a 23-year-old worker, Alka Thakore, employed with Coral Pharmaceuticals in the Mehsana district, died of pneumothorax with fibrosis in 2010. Taking cognisance of the letter, and converting it into a public-interest petition, the court directed NIOH to survey the unit.

NIOH in its report identifies polyacrylate—fine hygroscopic dust used as a binding agent in medicines—that sticks to the fingers of the workers responsible for the disease. Take the case of 27-year-old Naina Gajjar. She was employed with Coral Pharmaceuticals for 10 months and has been bed-ridden for the past six months. Doctors treating her say the disease was caused by exposure to highly absorbent polyacrylate manufactured by the pharma unit.

However, the Department of Industrial Safety and Health (DISH), which has been asked by the court in its November 27 order to investigate the hazardous units, says the workers may not have contracted the illness while working in the pharma unit. “Since there are many ceramic and tile-manufacturing units in the same village, the workers might have contracted the infection there,” says S B Chaudhary, director of DISH. The fine dust from these units also causes similar condition, he adds.

Experts refute this argument. It is true that there are ceramic and tile factories next to the unit where these people work but they will be exposed more to toxic polyacrylate being manufactured in the factory where they work, explains Aruna Diwan, former head of toxicology at NIOH. A study by researchers in China has found that it is the nanoparticles used in manufacturing of polyacrylate which lead to pneumothorax with fibrosis, she adds.

The report published in the June issue of European Respiratory Journal studied seven women workers in a pharmaceutical unit between 18 to 47 years of age, who were exposed to nanoparticles for five to 13 months. Through various tests it found that polyacrylate was present as nanoparticles and traces of it were found in the pulmonary tracts of the women.

Though the cases of pneumothorax are on the rise, diseases caused by polyacrylate have still not been included in the list of 29 occupational diseases in the Factories Act of 1948 in India.

This is not the case elsewhere. The German Commission for the Investigation of Health Hazards of Chemical Compounds in the Work Area and the Dutch Expert Committee on Occupational Health Standards have set a permissible exposure limit for respirable fraction of polyacrylate powders at 0.05 mg/m3. Similarly, industry associations across the world recognise polyacrylate powders as potential respiratory tract irritants and recommend an eight-hour exposure limit of 0.05 mg/m3.

Gajjar and other workers at Coral Pharmaceuticals were exposed to this dust for at least 10 hours, protected only by an ordinary mask. “Polyacrylate is highly toxic. The government must make amendments and list the illnesses caused by it as occupational hazard,” says Jagdish Patel, director, PTRC.

According to DISH officials, if the investigation reveals that the workers contracted illnesses while working in the factory, the unit could face closure under the Factories Act. But they note since the disease is not listed under the Act, the affected workers will have difficulty in getting compensation under Employees’ State Insurance Scheme. Meanwhile, the high court has asked the company to pay the workers suffering from the disease their monthly salary and bear the cost of their treatment. It also instructed the unit to start a medical facility on its campus.