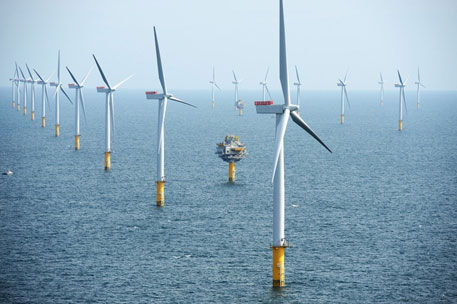 India’s first offshore wind power project is to be set up in Gujarat. An MOU for setting up a joint venture company (JVC) for executing the demonstration project has been signed by the Union Ministry of New and Renewable Energy (MNRE), National Institute of Wind Energy (NIWE) and a consortium of public sector agencies.

The project will be of about 100 MW capacity. The JVC will undertake detailed feasibility study based on the inputs received from pre-feasibility studies and necessary steps for  implementing the project.

The government has proposed a subsidy for setting up of evacuation and transmission infrastructure of the offshore wind power to the main land, which includes financial support for carrying out studies such as wind resource assessment, environment impact assessment (EIA), oceanographic survey and Bathymetric studies.

MNRE would also assist in obtaining clearances involved during the implementation of the project. The ministry also suggested building partnership with the Ministry of Defence, the Coast Guard and the shipping ministry to ensure seamless and time-bound approval process.

The project is expected to provide lessons for future rapid growth of off-shore wind power. India has around 7,600 km of coastline which offers great potential for offshore wind power development.

MNRE is pushing offshore wind power development a great deal. It has announced a draft offshore wind energy policy and preparation of a draft Cabinet note on it has been circulated for inter-ministerial comments. Finalisation of the proposed policy and the demonstration project, together, are expected to showcase technology and build investors’ confidence.