Gulmarg not ready for Commonwealh Games 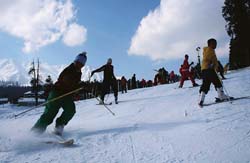 with the conclusion of national winter games in February, Jammu and Kashmir's (j&k) winter hotspot Gulmarg is now gearing up to host the Commonwealth Winter Games in 2010. But even as the state government is looking forward to place Gulmarg on the global winter sports map, there are serious questions on the town's infrastructure.

"Gulmarg lacks proper slopes which are a must for hosting any international event," said M Ashraf, former director-general of j & k tourism department. The town does not fulfil the requirements of the International Skiing Federation, which includes proper grooming slopes of 40 metres width, mechanical lifts and proper rescue facilities. "The state government should have invited international expertise to groom the natural skiing slopes of Gulmarg," said Ashraf.

Gulmarg also lacks adequate infrastructure to accommodate people during the games. Of the available 450-500 bedrooms in the town, only 100 are centrally heated. "We are not in a position to be part of such a big international event," said Fayaz Ahmad, managing director (operations), j&k Tourism Development Corporation.

The state's tourism department hasn't contributed in any form either. "There has been no decision on the matter and no assessment of the required infrastructure has been carried out yet," said Mohammad Iqbal, director (operations) j&k tourism department. According to him, participants could be accommodated in Srinagar and flown to and fro between Srinagar and Gulmarg everyday through helicopters. This, most believe, is impracticable.

In 2006, Alfred Ford, grandson of Henry Ford, had shown interest in developing a ski resort in Gulmarg. "The government lost the opportunity due to unprofessional approach and lackadaisical attitude of politicians," said Ashraf.