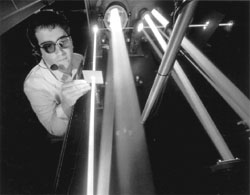 the idea of using lasers to ignite thermonuclear reactions is a relatively old one. The central premise is to implode a hydrogen pellet with a very powerful laser light and initiate a fusion reaction. But the major requirement has been the development of lasers which are powerful enough and can also fire at an extremely fast rate required for the fusion reaction to work. Now researchers at Livermore and the Naval Research Labs, in Washington may be closer to solving this problem (Science, Vol. 275, No 5306).

Thermonuclear fusion has long been thought of as the ultimate solution to the power problems of humanity. Using abundantly available hydrogen (from sea water, for instance), the idea is to use the same process as is used in the Sun to produce enormous quantities of energy, cleanly and cheaply. The only hitch in this whole scenario is that for fusion to work, extremely high temperatures are required. Using lasers, which are very coherent and energetic sources of light is one of the ways in which this can be solved. The Washington groups are proposing to build lasers which are not only powerful enough but also fast enough to initiate a fusion reaction. They are designing lasers for a facility called the National Ignition Facility, which will have a 500 terawatt laser (1 terawatt is a thousand giga watts) to try and achieve ignition of a fuel pellet and start a self sustaining fusion reaction. The usual method is to use glass doped with neodymium which will be pumped with light from flash lights.

The problem is that the glass heats up and takes time to cool down thereby leading to slower pulses. Livermore scientists are intending to use a helium cooled crystal, ytterbium doped strontium flourapatite which has a faster heat loss rate than glass. They also intend to replace the flash lamps with laser diodes to achieve higher efficiencies. Naval research Laboratory scientists have adopted a different approach to achieve the same effect. They are planning to use a gas, krypton-flouride, which can be circulated to cool down. The pulse rate for this laser will be about five per second compared to ten per second for the Livermore design. Which design finally proves itself suitable for laser induced thermonuclear fusion is a question which will be decided only in the future. But it is clear that if one of them is successful, it will bring the dream of a clean and cheap power source much closer to reality.