Gurgaon to bid goodbye to clotheslines 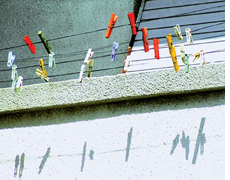 once considered a sign of poor neighborhoods, clotheslines are back in vogue in the us. In India, however, resident associations in Gurgaon, Haryana, are discouraging use of clotheslines.

Despite being a common practice until the 1980s in the us, hanging clothes outside gradually came to be considered as a 'blot on landscape'. Community covenants, owners' prohibitions and zoning laws stopped people from using clotheslines. Some argue that hanging clothes can lower property value. There are, however, groups like Project Laundry List that argue for clotheslines to save energy.

Drying clothes in the sun can save up to 10-25 per cent of household energy consumption. According to us Department of Energy 2001 data, around 60 per cent of households in the us have dryers and a dryer consumes 1150 kWh of electricity annually.Estimates show it costs an average household more than us $100 a year to use a dryer. According to reports, there were more than 88 million dryers in the country in 2005. If all Americans line-dried for just half a year, it would save 3.3 per cent of the country's total residential output of carbon dioxide, experts say. The 'Right to Dry' movement is trying to pass a law in North Carolina and Vermont so that association boards will not be able to prohibit people from using clotheslines.

Meanwhile, in Gurgaon, residents' associations deny people the right to hang clothes in lines citing "aesthetics". Residents of Wellington Estates in Gurgaon complain that they weren't aware of the rule till they moved to the apartments. While some families manage by hanging their clothes to dry inside the balcony, about 50 per cent of the residents at the estates have fixed metal bars to attach clotheslines outside their terrace.

dlf executives insist clothes do not hang on the faade of their buildings and that they urge potential customers to buy energy-consuming dryers. But a visit to the location proved otherwise. dlf, however, is planning service balconies now. Residents say they will either get used to the restriction or continue to use a clothesline.