Enforcement agencies had a busy year. They were tough at times, lenient at others 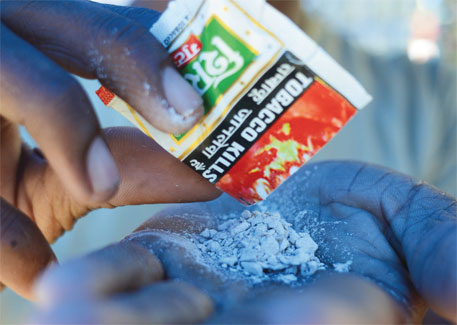 IN A span of four months, nine states have announced a ban on gutkha, a chewing tobacco that is responsible for 80 per cent of oral cancer cases in the country. The latest in the league are Rajasthan, Jharkhand and Haryana that announced the ban in mid-July.

Several documents and communications with FSSAI officials show that till recently neither the health ministry nor FSSAI took a firm stand on whether gutkha is a food or a tobacco product. Additional secretary in the health ministry, Keshav Desiraju, sent letters to all states recommending the ban only on April 25, 2012, after Madhya Pradesh went ahead on its own and banned the sale and storage of gutkha on April 1.

After the ban by Madhya Pradesh, states moved swiftly to impose the ban, which has left the smokeless tobacco industry in a tizzy. They are now dragging states to courts, calling the ban illegal. In Madhya Pradesh, the industry has filed three court cases against the state government challenging the ban. Four court cases were filed in Kerala and one in Bihar. 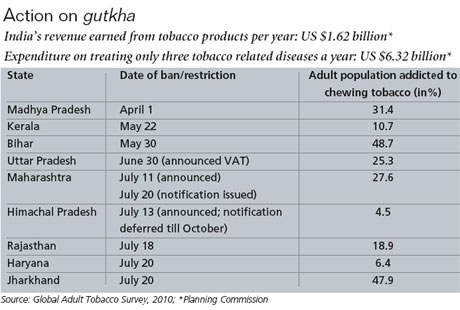 After two failed attempts to ban gutkha, first in 2002 and then in 2007, Maharashtra is treading cautiously. The state government has also invoked Section 30 of the Food Safety and Standard Act (FSSA) of 2006, which gives powers to states to ban any food product for a year in public interest. Along with chewing tobacco products, it banned paan masala, which does not contain tobacco but has an equally harmful chemical—magnesium carbonate. Just before announcing the ban, it also filed a caveat in the Bombay High Court on July 20 explaining why it is banning the product. The caveat will not allow the industry to seek a stay on the ban without giving opportunity to the government to present its case. The ban on gutkha and paan masala in Maharashtra alone will result in loss of revenue of around Rs 100 crore (about US $17.8 million) per year. According to the Planning Commission, the revenue from tobacco products annually is around US $1.62 billion.

Not surprisingly, the Centre has been reluctant to lose so much money.

On August 5, soon after FSSAI issued the notification, Arun Prasad, then joint secretary in the Union health ministry, had told this correspondent that gutkha cannot be banned as it is a means of livelihood for millions of people. It can only be “regulated” under the Cigarettes and Other Tobacco Products (prohibition of advertisement and regulation of trade and commerce, production, supply and distribution) Act (COTPA) of 2003, he had said.

On March 16 this year, FSSAI director (administration), Asim Chaudhary, had told Down To Earth that FSSAI is not clear if the regulation is applicable to gutkha. “The matter is in court,” Chaudhary had said.

On May 4, during the Lok Sabha question hour, members of the opposition Bharatiya Janata Party had urged the Centre to take cue from Madhya Pradesh and ban gutkha. Union health minister Ghulam Nabi Azad said that he alone cannot take a decision on banning gutkha; he would have to consult the Union finance ministry.

Sources say that gutkha industry’s interference is the reason for the Centre’s delayed recommendation and some states’ inaction to ban gutkha. It is rumoured that the assembly elections in Assam last year were fought on donations from the gutkha industry. A Noida-based chewing tobacco products manufacturer, has a factory in the state. Another reason for the lack of will on part of the government to ban gutka could be investments made by public sector companies in the gutkha manufacturing companies (see ‘LIC’s unhealthy choice’,).

The Union health ministry took its first official stand on the matter in an affidavit filed in the Delhi High Court in December 2011 in response to a case filed by the Dharampal Satyapal (DS) Group, challenging the new FSS regulations. The affidavit notes that FSSA definitions of food, ingredients, additives include products like paan masala and gutkha.

The industry calls the ban illegal, saying that COTPA is a special Act and FSSA is a general Act. So, despite FSSA being enacted in 2006, three years after COTPA, the latter does not stand repealed. “A special Act always comes above the general Act. When FSSA came into force, COTPA was not repealed. So gutkha is still regulated under COTPA,” says Sanjay Bechen, executive director of Smokeless Tobacco Federation, an association of smokeless tobacco producing companies in the country.

The federation is in possession of a RTI reply from FSSAI, dated June 29, 2012. The applicant had asked the food regulatory body whether gutkha is a tobacco or a food product and if it comes under FSSA or COTPA. The reply notes, “As per the extant Food Safety and Standards Act and regulation, gutkha has not been defined as food”. This shows the double standards adopted by FSSAI, says Bechen. “In court they say something else, and in the RTI response, they agree gutkha is not food.”

FSSAI chairperson K Chandramouli, however, clarifies that “FSSAI’s stand is clear. Gutkha is a food product. Now it is up to the states to implement it and enforce the ban.” The RTI reply may be specific to the questions asked, he adds.

In the affidavit submitted in the Delhi High Court, the Union health ministry notes that section 89 of FSSA overrides all other legislation, including COTPA. It adds that FSSA is also a special Act as it regulates laws related to food and food safety. The government also slams the smokeless tobacco producing companies’ claim that gutkha should be regulated under COTPA as it is taxed as a tobacco product. “Their payment of taxes has no bearing on the quality of the gutkha,” the affidavit notes.

The Union government has, meanwhile, sought the transfer of the DS Group case to the Supreme Court, saying the apex court is already hearing a case on the issue filed by the Central Arecanut Marketing Cooperative. On August 3 the Supreme Court will decide whether it will admit the DS Group case. If it admits the case, all ongoing cases against the states’ ban on gutka will have to wait for the apex court’s order.

Even if the apex court orders in favour of a ban, officials say the ban by a countable number of states will remain ineffective because of porous borders. Gutkha is still available in states that have banned the product, though they are not openly displayed in kiosks. To make a ban on gutkha foolproof, doctors and cancer patients’ associations in states like Uttar Pradesh and Karnataka are mounting pressure on governments. In Uttar Pradesh, the Indian Dental Association has filed a public interest petition in the Allahabad High Court, asking the government why it is reluctant to ban chewing tobacco products. Uttar Pradesh increased VAT on tobacco from 12.5 per cent to 50 per cent on June 30. The Madhya Pradesh government has also urged Uttar Pradesh to ban gutkha to make its ban effective.