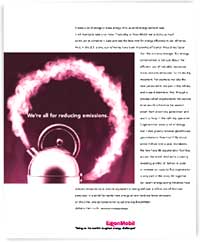 This summer, audiences worldwide have been treated to a precious sight: a multimedia advertising blizzard by us oil giant ExxonMobil emphasising energy conservation. Is the world's richest oil corporation finally getting on the bus?

To be sure, the first two-thirds of the ad's text is good, if foreboding, blather straight out of the corporate responsibility handbook. But wait: the ad then goes on to scoff alternative energy initiatives as "wishful thinking".

But let's overlook this for a while. Let's instead peek at some of the good work that Exxon claims it has done for decades. Well, lest we forget, the company has literally led the charge against any science supporting human-caused climate change. It spends millions of dollars, every year, on lobbying against such science. Earlier this year, nearly a third of the company's stockholders demanded that Exxon address climate change and examine energy alternatives. The company slapped down the demand, for, as the ad claims, such "new-fangled initiatives" don't answer concerns of the "real world".

And in early June, a White House aide was revealed to have altered high-level government studies, toning down the link between fossil fuels and global warming. Three days after, that aide resigned. Guess who hired him?

The first quarter of 2005 was one of the most profitable ever for the oil industry. ExxonMobil's executives looked at the bulging accounts and indeed decided on change. But how? Energy alternatives: solar and wind energy? No. Natural gas? Maybe. Greenwashing and more of the same? For sure