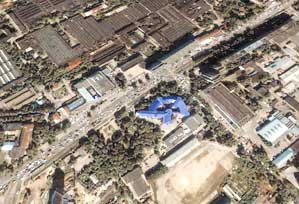 In satellite photos, like those on Google Maps, one can see the bright blue roof of a building in the shape of a hammer and sickle: Fabrika Kukhnya, or Kitchen Factory. Situated in southeast Russia, it’s a huge factory canteen dating from the height of Soviet industrialization in the 1930s. Today it is at the center of a struggle between local developers who want to tear it down and preservationists who value it as a historic example of Soviet architecture.

Vitaly Stadnikov, an Moscow-based architect who hails from Samara, said that in its heyday, the kitchen factory served more than 9,000 meals per shift.


Fabrika Kukhnya, which briefly served as a shopping centre after the canteen closed in the late 1990s, has been purchased by Clover, a development group which has plans for a massive new construction project.

Preservationists such as Stadnikov say the plan will destroy a historically valuable and architecturally sound building for no reason other than economic greed. But Clover denies it wants to tear down the building, only change its design.