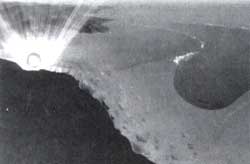 A GIANT meteorite struck the northern edge of the Yucatan Peninsula in Mexico 65 million years ago. The collision caused a crater 192 kilometres (km) wide and wiped out nearly half the world's species, including the dinosaurs. Recently, scientists have discovered that the impact shattered the edge of the continent, which collapsed in a giant submarine landslide (Discover, Vol 19 No 7).

While studying deep-sea sediment cores drilled from the middle of the Caribbean, geologist Tim Bralower of the University of North Carolina, USA, noticed an interesting combination of materials in the samples.

The samples extracted from the sediment layers from the time of the impact, look like tiny glassy drops of melted rocks called spherules. These spherules were mixed with rock fragments and fossils that clearly predated the impact. The researcher examined the same layer in cores from the Gulf of Mexico situated north of the impact site. Interestingly, he discovered the same cocktail of particles present in the samples.

Spherules are created from the heat of collision, which reveals the intensity of the impact. Researchers found close similarity between the other rock fragments and the rocks from the edge of the continent.

The findings showed that the impact must have fractured the continental margin more than 160 km away. The energy released from the impact was about a million times more than the largest earthquake ever recorded.

According to Bralower, the impact might have resulted in incredible changes on the sea floor. He estimates that the landslide displaced crores of gallons of water which rose in huge tsunamis and crashed into the area which are today known as Texas and Mexico. Even today, scientists do not know exactly the cause of the tidal waves.

Bralower is optimistic that his theories will help geologists find other unknown impacts which have not be found earlier. He says that probably the most simple thing to recognise in the rock record are extinctions.

It is not easy to know exactly what led to the massive extinctions at that time. "I think our study might help geologists recognise other ancient impact deposits. I think people are going to find more and more of them," Bralower says.