The US, it is widely believed, can go to great lengths to lay its hands on oil -- whether this means having to unleash a full-fledged war on faraway Iraq, or throwing open a part of the pristine Arctic National Wildlife Refuge back home. At least in the latter case, its attempt has been foiled for the time being 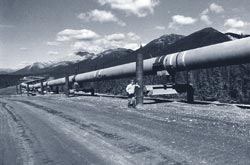 the us, it is widely believed, can go to great lengths to lay its hands on oil -- whether this means having to unleash a full-fledged war on faraway Iraq, or throwing open a part of the pristine Arctic National Wildlife Refuge (anwr) back home. At least in the latter case, its attempt has been foiled for the time being.

Despite hectic lobbying by the us administration, the senate stuck to its guns and voted 52 to 48 in favour of a proposal not allowing oil drilling in the anwr. Located in the northeast corner of Alaska, the 7.7 million hectares (ha) of the refuge are home to the polar bear, porcupine caribou and many other rare wildlife species.

This time round, the Republicans tried a new tactic to short-change the normal legislative process on a controversial policy issue. They included us $2.15 billion in expected revenues -- in the form of lease fee from companies interested in anwr oil -- in the senate's annual budget resolution.

It may be noted that senate rules do not allow extended debate on such a motion. Also, any controversial policy changes under an ordinary legislation require 60 votes to overrule the filibuster. Drilling supporters could not have mustered that much support. But a budget resolution needs only a simple majority -- 50 votes in this case -- to adopt spending and revenue outlines. In other words, 50 votes instead of 60 to open the refuge.

Normally, controversial policy decisions are not supposed to be made through budget bills. Although a second vote by the congress would have been needed later to authorise drilling, it would have retained the anti-filibuster safeguard. The issue of attaching the drilling clause with the budget drew much flak. "This budget's backdoor attempt to force through a plan to drill in the anwr is particularly shallow and cynical," said Connecticut senator Joseph Lieberman.

"This is a big victory for those of us who felt that drilling in the refuge was irresponsible," said California Democratic senator Barbara Boxer after the voting. Eight Republicans and one independent voted with 43 Democrats for an amendment moved by Boxer to strike the anwr provision from the budget resolution.

It is, however, too early to proclaim the anwr matter dead. The energy bill, which includes the issue of oil drilling, will come up for discussion in the senate later this year. But this defeat will definitely make it more difficult for the proponents of drilling.

Supporters of anwr oil drilling, mostly Republicans, have based their argument on national energy security. Ever since George Bush came into office in 2001, he has tried to reverse his predecessor Bill Clinton's refusal to start drilling. "Of course we are disappointed, at a time when our nation's economic and national security are at stake," said senator Kay Bailey Hutchison, a Texas Republican.

Republican senator from Alaska, Ted Stevens, claims that only a fraction of the refuge would be utilised. But the lobby opposed to the move contends that drilling will be scattered across the anwr's 0.6 million ha coastal plain. This belt serves as a calving ground for the caribou and is home to millions of migratory birds in the summer.

Democrats, a few moderate Republicans and environmental groups feel that the Arctic wilderness should be left untouched. "The solution is not just to throw open this environmentally sensitive area to drilling," said Democrat senator Jeff Bingaman during the house debate. It is suggested that the country should instead focus on stricter oil conservation measures like boosting the mileage standards of gas guzzling sport utility vehicles (suvs).

Tapping anwr's potential crude oil reserves in the name of reducing dependence on foreign oil imports from so-called unfriendly countries like Iraq has been an essential part of President Bush's national energy policy. In view

of this, the setback in the senate is a crucial battle that he has lost. As regards the ongoing war, only time will tell whether the spoils actually come the us' way.