Repetitive work done by hands can lead to serious nervous disorders, from numbness in fingers to permanent nerve damage 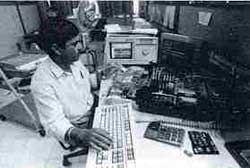 'SIT straight. Keep your elbows close to your body.' How often one has been admonished and hated it all along. But this is what was suggested by experts who met at the annual meeting of the American Academy of Orthopaedic Surgeons. If you are consistently using your hands for your work, you are liable to suffer from what is known as the carpal tunnel syndrome, a debilitating disorder of the wrist, hand and arm.

The disease was known to affect workers involved in repetitive physical activity like carpenters and jackhammer operators for many decades now. But now, -supermarket cashiers and even journalists have joined the ranks. And it is because of the latter that the disease has now become a household word, at least in the us. Reporters and journalists initially had a bad time coping with the realisation that pounding out stories on a typewriter or computer 6n have such dire consequences.

Tingling and numbness of fingers are the first symptoms of-the disease, which then leads to aches, shooting pains and weakness in the hand and forearm. One of the common early warning signs is, awakening at night with shooting pain or numbness and tingling feeling in the arms and hand. Most people do not connect the pains felt at night with their activities during the daytime.

The syndrome is a result of pressure on the median nerve, which along with nine tendons and a number of blood vessels passes through a narrow tunnel in the wrist, made of bones and a ligament. Carpal tunnel syndrome can leave people without jobs as they loose manual dexterity and strength of their hands. Many require long rehabilitation periods and others have to undergo surgery to relieve the pressure on the nerve. Some really bad cases 6d. up with permanent nerve damage.

Physical therapists, orthopedic surgeons and ergonomic experts suggest good posture for people working on computers. Straight back with good support, feet flat on the ground, forearms parallel to the ground and in line with the hand. Unbent wrists without support, elbows close to the body all make a good posture. A computer screen placed at eye-level or a maximum of.15 degree below the eye, could be allowed. Short breaks of at least 15 minutes after every two hours are also very important. They also advice getting up, moving around and stretching. Massaging the palms, fingers and thumbs of both the hands helps to relax the tension on the nerves.

Conservative therapy according to surgeons is the best treatment, with surgery reserved for a small percentage of patients. Once the conservative therapy starts, the patient is advised against the use of the injured hand even for ringing the doorbell or holding a cup for -a period of 7-10 days. The therapy requires the patient to wear a wrist brace and splint, particularly at night and taking anti-inflammatory medication. In the case of pregnant women and those taking birth control pills, 150-200 mg of Vitamin B6 per day is also said to be helpful.

Patients who do not respond to the therapy are administered more direct treatment. A new treatment was prescribed by J Lee Berger, affiliated with the Seton Hall Graduate School of Medicine in West Orange, New Jersey, us. This minimally invasive procedure to reduce pressure on the median nerve involves insertion of a balloon catheter. Similar to the one used in angioplasty for opening blocked arteries, the catheter is slipped through a quarter-inch incision under the ligament of the carpal tunnel. Once inside the balloon, it is inflated to make more room for the nerve. Eighty five per cent of Berger's 120 patients have shown marked improvement after the treatment.

Earlier this year of non-invasive laser treatment was introduced by Michael I Weintraub, a neurologist from Briarcliff Manor, New York, us, which stimulates the nerve and relieves the symptoms of the syndrome. The response rate of this treatment was over 70 per cent. While' Daniel I Nagle of Northwestern University Medical School found from his multicentre study on 500 patients that operating through a scope rather than making an incision in the wrist reduces the recovery time and allows the patient to return to normal activity earlier.