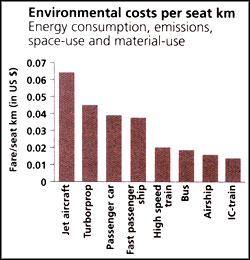 airships seem to have the potential of offering a good alternative to aeroplanes and road vehicles in some segments of the passenger transport market, say researchers in the Netherlands. Airships are dirigible-powered balloons and derive their lift from a gas (usually helium) that is lighter than air. The airship's body can be built of ribs and girders to provide it a rigid frame.

Studies show that there are no technical or economical hindrances in safe operation of an airship fleet. After analysing the environmental costs such as energy consumption, emissions of carbon dioxide, Nitrogen dioxide and hydrocarbons, space-use and material-use, the researchers concluded that the use of airships would be cost-effective as compared to several other modes of transport.

After the Second World War, the airship development continued predominantly for military operations and non-transport markets. However, a few airships later managed to provide passenger service between Paris's two major airports. The researchers have found that there is no big technical problem in building a modern large rigid airship capable of taking off and landing automatically. Airships also have the potential of meeting the current aviation safety requirements.

There are prospects for profitable operation of airships especially in the holiday and leisure markets. Another market for airships could be transportation of large and heavy components such as turbines and factory processors that cannot be transported in small pieces. Researchers say that it would be better to build airships specially for the cargo industry.

The findings suggest that operating a fleet of half-and-half 100-seater and 400-seater airships may not be profitable for the domestic market. However, there is a good possibility of earning profit if airships are operated in the international market. An operator working with a mix of national and international flights of airships may have the best prospects of profitable operation.