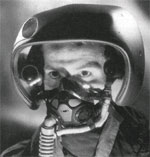 the instructions from airline cabin crews are always the same and end reassuringly with the words: 'Breathe normally'. But have you ever wondered, 'in the unlikely event of a loss of cabin pressure' in your jumbo jet, how long the oxygen supply flowing through the plastic mask would last?

Normally, the pilot will bring the aircraft down to around 30,400 metres, where passengers and the crew can breathe without assistance, causing no more than a queasy fright. But if you are flying over the Himalaya or the Andes, there is nowhere to descend. At this height, 60,000 metres, the passengers will feel very woozy and it would be difficult for pilots to remain alert.

Westland Technologies of Somerset, uk, has now developed a system for recycling oxygen from the aircraft's engine. According to a report in Spaceflight, the company's new device may be installed in the flight decks of jets to give pilots the benefit in the event of depressurisation at a high altitude. The system is referred to as on-board oxygen generation system (obogs).

obogs could be of immense help when flying at high altitudes. Today, it is already used on the prototype us f-22 air-superiority fighter jet, the Bat-wing, Stealth bomber and the Eurofighter-2000 combat aircrafts. Pilots and passengers are provided with oxygen produced directly from the aircraft engine via an obogs at the required concentration and pressure. Without this equipment they would black out in seconds.

obogs takes hot, high pressure air from the engine, cools it in a heat exchanger and then removes nitrogen before supplying the pilot with an oxygen rich mixture.

Zeolite is a silicon based mineral with the texture of sand, which acts as a molecular sieve. When the first zeolite bed becomes exhausted, the system moves to the next, while the original bed is regenerated by passing a little oxygen back to 'wash' the nitrogen away.

A cycle between three beds provides a continuous oxygen supply for as long as the aircraft engine runs. On-board oxygen tanks would be heavy and can create a safety hazard during refuelling. So far, there have been no recorded incidents of a civil jet being seriously hazarded by the absence of an oxygen recycling equipment. But it can happen in future and obogs could be an answer.