Three human species which scientists earlier believed came one after the other, may have actually coexisted in Java 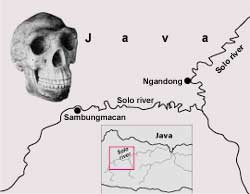 it was a troika of human species which inhabited the expanse of earth, together, as recently as 30,000 years ago. New research findings suggest that Homo sapiens, Homo erectus and Neanderthals did not occupy different rungs of the ladder of evolution as was believed; instead, they could have coexisted.

Led by Carl Swisher iii of the Berkeley Geochronology Centre in California, the us-Canadian-Indonesian team of palaeontologists went back to fossil sites along the Solo river in Java including Sambungmacan and Ngandong to search for an answer to the enigma that has long foxed anthropologists: where and how did the human being evolve? Results indicate that an early human relative -- Homo erectus -- a smaller-brained, thicker -boned, physically heavy-set species, appea red to have lived there until about 27,000 to 53,000 years ago. These new dates were "surprisingly young and, if proven correct, implied that h erectus persisted much longer in Southeast Asia than elsewhere in the world," according to the research team writing in a recent issue of Science .

Effectively, this would mean that h erectus, which evolved 1.8 million years ago, survived some 250,000 years after it was thought to have become extinct. Therefore, the surviving population of h erectus would have been alive at the same time as anatomically modern human beings and also Neanderthals. The Neanderthals are thought to have made their last appearance 30,000 years ago in southern Spain. By this time, modern h sapiens had emerged and had spread all over Africa and Eurasia, as far as Australia. If h erectus and h sapiens coexisted, it is not yet known to what extent they were in close contact and if they interbred.

The findings may require a fresh approach to the human evolution tree. Until now, human lineage was considered to be a product of a neat progression of one species after another without any overlap. Two theories have been propounded to explain how the evolution of humans first began. One is the 'Out of Africa' theory which supposed that h erectus first appeared in Africa about 1.8 million years ago and spread through Eurasia until it vanished around 200,000 bc after being displaced by the more slender, handier, brainier h sapiens. The second -- multiregional theory -- holds that h sapiens developed among h erectus groups in several parts of the world at more or less the same time with advanced newcomers drifting in, adding their own to the gene pool. This would explain the physical differences among various races like Asians and Africans.

According to Bill Kimbel, science director at the Institute of Human Origins in Berkeley, California, more conclusive evidence of the new research could pose "a major problem for the multiregional theory" as it would establish that human species were alive in the same place and at the same time. However, there are voices of dissent.

Milford Wolpoff, a palaeoanthropologist at the University of Michigan and an ardent supporter of the multiregional theory challenged the accuracy of the dates and identification of skulls at the Java sites, stating that they belonged to h sapiens and not h erectus. He believes that the new research is based on "fundamentally flawed logic" that assumes that the samples belong to h erectus. Kimbel also notes that the findings do not coincide with the earlier specimens of h erectus. The Java skulls studied now reveal a capacity average of around 1,200 cubic centimetres (cc), much larger than the 900 cc average of earlier h erectus species, though smaller than the 1,400-1,500 cc volume of modern humans.

The researchers though, vouch for their findings. Swisher and team spent close to four years minutely detailing the area near Solo river, which has yielded several specimens of early humanoids. They first obtained some samples of animal teeth (of the water buffalo) from the same 12-inch-thick layer in which large amounts of fossils including water buffalo teeth were found by Dutch geologists in the '30s. They compared the two and concluded that these skulls indeed could have belonged to h erectus species. However, Swisher's team would like to support their evidence with foolproof tests. "One thing we would like to do is to go back to the site and find any remains containing carbon" which can then undergo carbon dating method, an extremely accurate test for material not older than about 50,000 years, observed Swisher. "The other thing we can do is try to date the soils directly." Both these tests are planned this year.