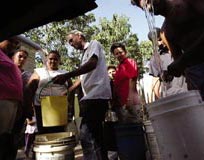 The provincial capital, Camagey, 570 km from Havana, has been hit hard by a long-lasting drought. The situation is one of the worst seen in the past decade. According to official sources, June 2004 was one of the driest months in Cuban history. The Cuban office of the World Food Programme (wfp) launched a project with a budget of more than us $ 161, 000 in food aid to benefit 114,195 children under five in Camagey, Las Tunas and Holgun. The government has set up a special commission to deal with the crisis. The food shortage accompanying prolonged periods of drought is the consequence most dreaded by the 11.2 million Cubans living on the island.