A quicker, pollution-free and cost-effective technique to harden iron alloys 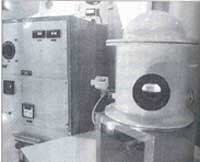 IRON alloys are usually hardened before they are shaped into products -- by a technique that is slow, polluting and expensive. But recently, scientists at the Pune-based Institute of Applied Research claim to have developed a process that is little of the above.

The hardening process, called nitriding -- from nitrogen compounds called nitrides that are added to endow hardness to the alloy -- is commonly used to improve the surface properties of engineering components by reducing friction and wear.

The conventional process, which takes about 25 hours or even more, involves heating the alloy at 500oC in presence of gaseous ammonia, which makes it not only expensive but also polluting. Further, researchers say that this process may cause distortions and changes in the surface colour of the alloy.

In the new method, instead of using the polluting ammonia, the alloy is placed in a chamber bathed in a pool of plasma -- a state of matter composed of only charged molecules -- of non-toxic hydrogen and nitrogen molecules. High voltage is then applied to the chamber at a temperature much lower than the 500oC needed in conventional nitriding.

Hence, there are no heat-induced structural deformations on the materials being treated. The time is reduced to about half, explains Shriram Kulkarni, a researcher at the institute.

Kulkarni's group believes that the new method can be used to change properties such as friction, wear and lubrication of a wide range of materials, from cast iron to stainless steel.

"This technique will perhaps replace all other nitriding methods available today," predicts Kulkarni.