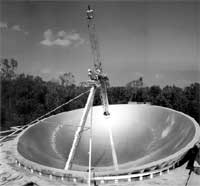 tapping renewable energy seems to be in the blood of the residents of Auroville, the little township located on the outskirts of Pondicherry. Beginning with solar energy to power their houses way back in 1970's, the community is today exporting energy efficient equipment like PV pumps, wind turbines and biogas plants to other states.

It all started with Aurovillians' experiment with wind energy, using discarded windmills from National Aeronautic Limited's warehouse in Bangalore and retrofitting them to suit the local climate. The windmills were successfully overhauled and are still in operation. Many turbines have been manufactured since then. Says Gilles Guigan from the Auroville-based Centre for Scientific Research (csr), "Over the years, we have perfected the system and now we manufacture the best wind pumps in India."

After windmills, the community took up solar cookers. By the 1980s, the Aurovillians also emabarked on experimenting with biogas units. "When the systems came in, the units needed some development and that is when collaborations started and engineers were invited," says Hemant Lamba from Aurore, a unit in csr, which works on solar energy.

Soon, they improvised upon the existing biogas plants by using ferrocement, which prevents corrosion. Ferrocement is a highly efficient and cost-effective mixture of cement and steel in which a thin cement mortar is reinforced by wire mesh. Ferrocement lasts much longer than the brick and steel used in traditional biogas plants. "Currently, Auroville is the only exporter of biogas plants to the Andaman Islands," says csr scientist Tency Beatens.

With such achievements under their belt, the community was nominated the Blue Planet Prize in 1997, an annual award given by the Asahi Foundation of Japan on global environmental conservation. The same year, it was awarded the "best ngo in renewable energy sector" by Indian Renewable Energy Development Agency (ireda).
To bring solar light to the Matrimandir, a temple built in the memory of Mirra Alfassa popularly referred to as The Mother, the Aurovillians borrowed money from the World Bank line of credit through ireda with assistance from Kolkata-based Development Consultant. The project cost Rs 1.3 crore, of which 85 per cent was obtained from ireda .

Due to the project now, the power plant provides excess power, which is used for pumping water and the remaining power is fed into the electric grid. This solar power plant consists of 484 panels with 240 batteries of 1200Ah/240 volts capacity.
Solar power has also entered the kitchen, thanks to the innovative efforts of the Aurovillians. On the kitchen rooftop, a spherical bowl of 15-metre diametre which serves meal for around 1,000 people has been installed. Fitted with 11,000 flat mirror slabs, the bowl produces steam in a heat exchanger to cook three meals a day. The heat exchanger consists of a stainless steel coil connected to heat storage tank. The steam enters the double-jacketed steam cooking vats in which food is cooked. At the centre of the bowl is a tall receiver, which tracks the sun with the help of a computer controlled tracking system.

Today, living with renewables has become a way of life for Aurovillians. But Guigan feels that there is a long way to go before the Auroville turns completely into a renewable energy dependent community.