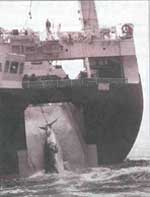 "RESFARCH whaling" is malignantly alive in Japan. In mid-April, a Japanese factory ship, the Nisshin Maru, returned to Tokyo with 330 minke whales harpooned in the Antarctic during this year's "research mission".

Japan has earned worldwide notoriety for sickeningly indiscriminate whale slaughter. It has killed since 1987 about 300 minke whales every year. Environmentalists say that research is only another euphemism for commercial whaling, since most of the whale meat winds up in restaurants.

On paper, Japan has committed no crime, although the International Whaling Commission banned commercial whaling in 1985. Japan's Institute of Cetacean Research is free to carry out so-called research whaling on behalf of the government.