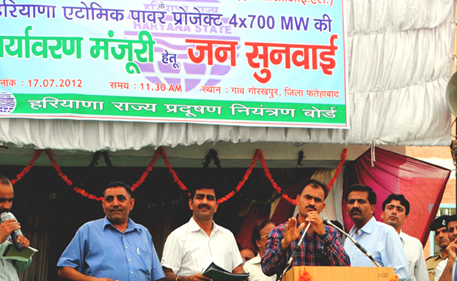 A public hearing organised by the Haryana pollution control board to push through the proposed 2,800 MW nuclear power plant in Fatehabad district ended abruptly following public protests. As soon as the hearing started in Gorakhpur village on July 17 amid heavy police security, people stood up on the chairs and started shouting, booing and thrusting their fists in the air in protest.

The officials tried their best to address concerns raised by residents of Gorakhpur and nearby villages where the four nuclear power plants of 700 MW each are to be built. The executive director of the public sector undertaking which is developing the project, the Nuclear Power Corporation of India Limited (NPCIL), went to the extent of suggesting that radiation is good for people.

“Radiation is all over the world. Therefore, a nuclear power plant should not raise additional concern. It is actually our friend in many ways because it helps in cancer treatment,” said Nalinish Nagaich, while addressing the gathered public. Mounting evidence presented in scientific reports talk about the risks of radiation-induced health hazards, but Nagaich, other NPCIL officials and hired health expert S N Jain brushed aside concerns over health impacts and long-term risks of radiation exposure. They presented the proposed project as a “win-win” project for the public.

A total of 608.5 hectares (ha) of land is to be acquired for the project, primarily in Gorakhpur (533.5 hectares) and in the adjoining villages of Badopal and Kajal Heri. According to area residents, almost the entire land of Gorakhpur village is being acquired for the project. Residents have been opposing the project by holding sit-in demonstrations and protests outside the district collector's office from the time it was first proposed in 2009.

Detailed EIA not made available 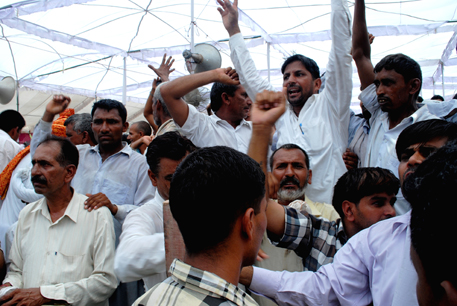 At the public hearing, hundreds of villagers turned up to voice their protest. Even women from the village joined the crowd. The residents expressed outrage about the fact that the detailed Environmental Impact Assessment (EIA) report of the project was never put in the public domain for review; only an executive summary of it was made available just five days before the public hearing. Sahib Gotarar, the district information officer, failed to pacify the crowd.

As per the EIA Notification of 2006, the EIA report is supposed to be kept for public review (both in the regional language and in English) at prominent venues in the locality where the project is proposed.  The public also raised concerns about three major issues: land acquisition, water and health hazards of radiation.

T R Arora, chief project manager of NPCIL for the Haryana Atomic Power Project, insisted that questions that were raised by the public were clearly answered. But the team from Delhi non-profit Centre for Science and Environment was witness to the fact that many contentious issues, such as number of people to be displaced, their employment and hot water disposal from the plant, were glossed over by the authorities.

Anti-nuclear activists raised questions relating to availability of water at the plant in case an accident occurs—the only source of water in the area being a canal of the Bhakra Nangal dam—and the security of the power plant in case of low water availability or drought. These questions went unheeded. When Banwarilal Sharma, an activist, asked questions relating to the number of people who would be displaced—he indicated that it was more than 30,000, far above the number mentioned by NPCIL officials—the microphone was snatched from him. The incident led to an uproar in the crowd that was already agitated. Soon, the public hearing ended abruptly with the officials leaving the venue in haste. The summary of the public hearing was not read out at he end of the meeting which is a mandatory requirement.

Hansraj Siwach, president of Kisan Sangharsh Samiti, a farmers' front, called the public hearing a farce and accused NPCIL of lying. He along with other activists and protesting village residents objected to heavy barricading of the venue.

Gorakhpur primarily comprises a thriving farming community of land-holding farmers, shared croppers and migrant labourers. Typically, the yield is three crops a year, consisting of wheat, cotton and paddy.  The area is lush and fertile, supporting more than 500 families in Gorakhpur itself.

Besides health concerns, there is something more farmers are worried about—losing their ancestral land and livelihood. The fear of losing losing land prompted Badluram of Gorakhpur to consume pesticide a few days before the public hearing. He was in the hospital on the day of the public hearing. “He was worried about the uncertain future of the family because for generations they have lived on this land and their only skill is cultivation,” said Kashmir, Badluram’s uncle. Thus, even when Badluram’s family is being offered Rs 25 lakh per acre (0.4 ha) as compensation for their 10.52 ha land to be acquired, they prefer their substantial yearly yield of 30 quintals of wheat, 12 quintals of cotton and 40 quintals of paddy per acre. Narendra and his family, whose 36.42 ha land is at stake, vows to go through any ordeal to retain his ancestral land.

Photo Gallery: Nuclear power at the cost of livelihood