If the comet still exists, people on the Earth could witness a spectacular show in the night sky in December

Many astronomers tracking the progress of comet ISON, also known as “comet of the century”, believe a part of it may have survived the close encounter with sun on Thursday midnight. A few, however, have said that since it had flown too close to the sun, it might have disintegrated in space.

If the comet has survived after its flight close to the sun, it is expected to put on a spectacular show for Earth during the first weeks of December, before making its closest approach to our planet on December 26, 2013.

Karl Battams of NASA's Comet ISON Observing Campaign tweeted late on Thursday: "Alright we're calling it, and you heard it here first: We believe some small part of #ISON's nucleus has SURVIVED perihelion.”

The comet was named after and is an abbreviation of the International Scientific Optical Network, a space surveillance network used by a pair of Russian astronomers to detect the comet in September 2012. 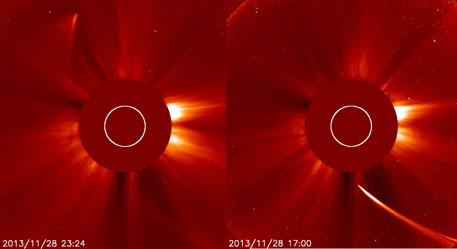 According to NASA, the comet began its trip from the Oort cloud region, a hypothesized spherical cloud of predominantly icy planetesimals, of the Milky Way and passed close to the sun on Thursday, skimming just 730,000 miles above the sun's surface. The image below, posted by NASA, shows the comet approaching the sun and a lighter shining chunk moving away from the sun.

Another tweet by NASA on Thursday said, “The fate of #Comet #ISON during its trip around the sun today is not yet established. It's likely it didn't survive”.

Experts who had been monitoring the movement of the comet had earlier said that the sun's gravity could rip the comet apart, breaking it into several chunks. A few also believed the comet was already disintegrated and would disappear once it passes the sun.

Given the comet’s anticipated trajectory and on the condition that the comet has survived the encounter with sun, its closest approach to Earth will occur in December. That is when the comet will also put on its best and brightest show yet in the night sky.

Earlier this week, NASA has released a high resolution image of the streaking comet that looked like a swimming tadpole. 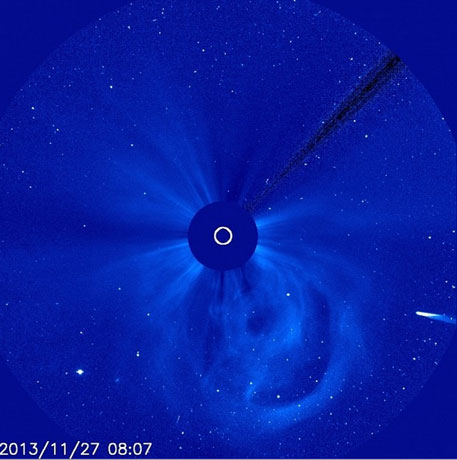