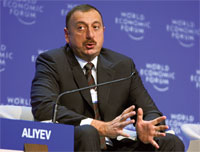 The Organized Crime and Corruption Reporting Project (OCCRP) is facing a spam avalanche after naming Azerbaijani President Ilham Aliyev Corruption’s Person of the Year for 2012. Drew Sullivan, the editor of the Sarajevo and Bucharest-based investigative journalism outfit, himself received more than 4,000 messages in the past month, saying Azerbaijani citizens love their president. OCCRP computer specialist estimates that five to 10 per cent of the messages are from automated servers, while the rest are cut and pasted or forwarded by actual people.

OCCRP’s allegations are substantiated by Azeri blogger Hebib Muntezir’s post that the country’s education ministry had issued a directive asking teachers and students to send complaining e-mails to OCCRP. The ministry’s message, which Muntezir posted online, included sample complaints in Azeri, Russian, and broken English, as well as the e-mail addresses to which the messages should be sent. The suggested English message says: “It was very upset, having read information on our president on a site http://occrp.org. Because, all of us are happy with works on development and an upclassing of our country.”