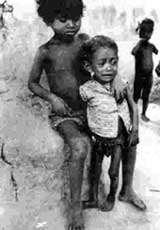 CLOSE on the heels of the World Food Summit comes a report that people in more than 40 tribal and backward districts in 12 states in India die of starvation despite contrary claims made by state governments. The report has been released recently by the central planning committee, which was constituted following reports of starvation deaths of tribal children in Amravati district of Maharashtra during monsoon in 1993. The report calls upon the state governments to prepare detailed action plans for the starvation-prone areas. The situation is particularly grim in the primitive tribal areas of Chinu in Andhra Pradesh, Malghat in Amravati and in the districts of Palakkad in Kerala and Kalahandi in Orissa where a large number of people are dying of starvation. The committee has expressed concerns about the inability of the state and central governments to take preventive measures against the occurrence of such deaths. it has identified land alienation as one of the crucial factors linked to malnutrition, destitution and the analysis of deaths among tribal families.