Have Gujjars, will survive 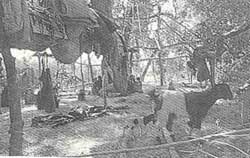 The presence of Gujjars in the Rajaji National Park could be responsible for the significant increase in elephant numbers in the past four years, wildlife observers claim. According to them, the Gujjars have minimised poaching and regulated the monitoring of the elephant population in the park. The number of elephants in Rajaji has risen from 338 in 1989 to 552 in 1993.

The latest census, conducted by park authorities and the Dehra Dun-based Wildlife Institute of India, used the more authentic "visual" count instead of the traditional pug method, revealed Mohammad Hassan, director and conservator of the park. Significantly, Rajaji is one of the few national parks in which the forest dwellers have been allowed to stay.

"The local people help to protect wildlife and maintain the balance of nature wherever they have not been removed from forests and parks," maintains Avdhesh Kaushal, chairperson of the Rural Litigation and Entitlement Kendra in Dehra Dun. Kaushal points out that the people ousted from Project Tiger reserves such as the Betla Tiger Reserve in Bihar and Kanha National Park in Madhya Pradesh have turned hostile towards the resources to which they have been denied access, leading to a dramatic decline in wildlife populations. In Rajaji, where the forest people still live in their traditional habitat, organised poaching is discouraged.