A simple procedure helps in the conversion of surplus fodder during the monsoons into hay, which can help overcome fodder shortage in the summer and winter months 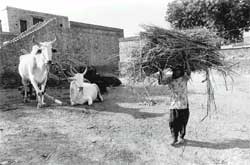 MAKE hay while the sun shines. The oft-repeated saying, if followed literally, can solve a major problem facing our farmers. Owing to the seasonal variations, the supply of fodder also fluctuates. While there is a flush of fodder in monsoons, the supply nose-dives in winters and summers. According to a team of scientists led by S S Sengar at the Indian Veterinary Research Institute (ivri) in Izatnagar, Uttar Pradesh, surplus fodder generated in rainy seasons can be preserved as hay for subsequent use in leaner times (Changing Villages, Vol 15, No 1-2).

Fodder is most nutritious when grazed standing in the field. The longer the interval between harvesting and feeding the fodder, greater the losses in its nutritive value. This is because fodder metabolises actively and cannot be stored as easily as the dormant parts of plant like seeds and tubers. However, by using methods that stop metabolism in the harvested fodder, it can be preserved. One such method is dehydration or hay-making. Green fodder cut and dried in the sun just before the flowering stage in the crop is known as hay. It is different from straw, which is obtained after harvesting the fully formed crops and is poorer in nutrients.

Good quality hay can be obtained from leafy fodder and hollow thin stems cut at the right time and cured properly. The best time for harvesting the crop for hay-making is when 25 per cent of the plants are in the flowering stage. Too early a stage yields a low tonnage and a later stage makes the crop woody and of low nutritive value. Fodder crops with soft and pliable stems are the most suitable for hay-making. Green oat, green lucerne, cow pea and annual and perennial grasses yield good hay. And if the shattering of leaves is taken care of at harvesting time, maize, jowar and bajra crops are also suited for this.

After harvesting, the crop should be left in the field for four to five hours and should be turned over during the period. By the end of second day, the moisture content of the hay is lowered by 25 per cent. Storing in small bundles saves hay from rain water and allows aeration to take place. This preserves the green colour of the crop and thus its nutritive value.

Researchers, however, add a word of caution about this seemingly simple technique. Immense care has to be taken while preparing hay. If the crop is not quickly dried, and instead left in the field without proper care, the nutritive value of the crop suffers. The losses can occur due to shattering of leaves when leaves dry earlier than the stems. This happens when drying is prolonged without turning over of the crop. Moreover, if at the time of preparation of the hay, heavy rains occur, there is loss in nutrients due to leaching. Hay otherwise contains all nutrients present in the crop with only loss of some carotene when it is dried in the sun.