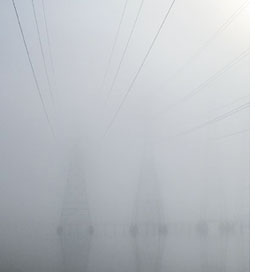 a large part of northern India, including capital Delhi, went powerless due to tripping of transmission lines of the Northern Grid. It first happened on March 8 and then on March 10, resulting in large-scale blackouts and affecting the Northern Railways network. The reason dense fog, unusual for March.

Fog requires certain amount of moisture in the air but the "winter rains" did not happen this year. Western disturbances usually bring sudden winter rain and snow to the north-western parts of the Indian subcontinent.It is a non-monsoonal precipitation pattern driven by the westerlies.

This year, however, the westerlies by-passed northern India and affected only central and north-west India. What caused the fog then? There is much confusion and too many loose ends in the explanations.

Fog develops when there is a standard mix of moisture, aerosols (which act as nuclei for moisture to condense), low temperatures, slow wind and a clear sky. Typically, when humidity levels are above 75 per cent and the horizontal visibility on the ground is less than one km, the condition is declared foggy. Humidity levels on March 8 and March 10 were 94 per cent and 77 per cent.

Experts say conditions for fog can be triggered in a very short time. "Tropospheric winds (slightly above the ground) could have caused the fog. Experiments conducted earlier have shown that free tropospheric winds trigger sudden fog," says M K Tiwari, head of the radio and atmospheric science division at the National Physical Laboratory, New Delhi.

The National Physical Laboratory, along with the Central Pollution Control Board in 2001 conducted experiments to study fog in Indo-Gangetic plains. Tiwari says there was an additional temperature inversion layer found at the ground level then, besides the regular inversion layer that forms in winters. "Inversion was seen mainly at the height of 10 m above the ground and could have important implication in fog formation," he says. But the reason for presence of additional inversion layer is still not known. The 2001 study, which was also mandated to look into the role of pollution in fog formation, was never done.
Some say increased fog is due to rise in air pollution,

especially particulate matter. Increased construction activities have also been cited as reasons for increased alkalinity of fog. S C Bhan, director of India Meteorological Department, does not agree. "Construction is confined in and around Delhi and started only four to five years ago. Besides, tripping does not happen in Delhi. It happens far from Delhi and is not linked to any changes happening in Delhi," says Bhan. He maintains that dry winter may have contributed to increased dust particles in the atmosphere which are also hygroscopic in nature.

Tiwari argues that free tropospheric winds transport particles and moisture from other regions. "Even if winters are dry, the ground has enough water to provide moisture," he says. Increased surface irrigation in winters and large number of canals also provide enough moisture. Even if temperature increases a little, like it did in March, surface water gets evaporated and increases atmospheric humidity.

Tiwari says no study has been carried out to find the impact of air pollution on fog formation or fog longevity. "Many pollutants like nox,so2 and dust particles are hygroscopic and increase water content in fog. Studying the behaviour of different pollutants will be of particular interest as there is enough evidence to show increase in fog events over the Indo-Gangetic plain during December and January," he asserts.
While how and why fog forms is not clear, what is clear is it trips power transmission lines. "The atmosphere has a certain electrical conductivity, which increases in the presence of fog," says C G Deshpande, scientist at the Indian Institute of Tropical Meteorology (iitm), Pune. Conductivity depends on the kind of particles present in the fog. "Presence of alkaline compounds in the atmosphere increases electrical conductivity," says S Tiwari, scientist at Rain and Cloud Physics Centre, Delhi. Alkaline compounds originate from the soil, especially in dry season. "This winter being dry, alkaline compounds originating from the soil could be high in the atmosphere," he says.

The Pune-based institute analyzed fog water samples during three consecutive winters--from 2000 to 2003--in Delhi and found fog to be alkaline. This was attributed to less amount of rainfall; the study was published in the journal Atmospheric Environment. "Besides particles of calcium, potassium and magnesium, the alkaline nature is due to presence of ammonium ions," says S Tiwari. When a plant or animal dies, or an animal excretes, the initial form of nitrogen is organic. Microbes convert the organic nitrogen into ammonia. Some say excessive use of nitrogen fertilizers also leads to increased ammonium ion.

Another analysis of fog water in January 2001 had also established that fog was turning alkaline. Among the cations (positively charged ions) which led to alkalinity, calcium was found to be the dominant ion. These cations originate from the soil.

Electrical conductivity also depends on the size and concentration of the aerosol particle. The particles being hygroscopic, their size increases sharply when moisture in the atmosphere increases (when relative humidity increases above 75 per cent). "When the particles increase in size and get deposited on insulators or even when they form a continuous line between two transmission lines, they increase electrical conductivity and thus power trips," says S Tiwari.
After the recent tripping, the union power ministry set up a crisis management group, headed by a member of the Central Electricity Authority, to look into the grid problem and cleaning of transmission lines. The Power Grid Corporation of India takes up manual cleaning at the beginning of winters every year.

They also get the much-needed help from rains. The fact that there were no rains this year could have made things worse. The corporation has decided to get chemical analysis of deposits on the insulator strings to identify the source of pollution. But the need of the hour, say experts, is to change the insulator material or design to make it resistant to fog.