He search is on 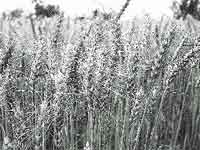 researchers in the us have identified several seed varieties that are resistant to ozone damage. The findings would help farmers to select crop seeds that are less susceptible to damage from ground-level ozone. Scientists at the us Department of Agriculture's ( usda ) research center, Beltsville, Maryland, have found that crops which are exposed to excessive ozone levels produce nearly 10 per cent less yields than those grown in clean-air regions ( Environmental Science & Technology , Vol 31, No 11).

For a long time, researchers have been studying plant physiology to find out how farmers can compensate for the crop damage caused by the pollutant. According to Steven Britz of usda 's Climate Stress Laboratory, they are trying to investigate what differentiates sensitivity to ozone.

Carol Browner at the us Environmental Protection Agency ( epa ), says, more than 50 studies have shown in the last decade that ozone adversely affects the yields of wheat, corn, barley, beans, soybeans, cotton and tomatoes. The agency has estimated that the crop damage from ozone in the us is nearly us $3 billion a year.

The researchers included two popular but genetically different varieties of soybean seeds in the study that started in 1995. Both the varieties of seeds were grown under field conditions and exposed to different ozone levels. They used eight cylindrical chambers and each of them had a diameter of three metres. These chambers were covered with plastics and opened at the top to control ozone levels for each group of 100 plants by air pumps. The pumps had been connected to the base of each cylinder.

Some plants were exposed to ozone between 10-20 per cent above ambient levels. Whereas charcoal filters were used to purify the air for other plants. The researchers observed visible damage in the form of leaf discoloration even at 60 parts per billion ( ppb ). This level is below the current 80- ppb limit stipulated by the Clean Air Act.

The present approach was different from earlier research by Britz and his colleagues. In this process, the plants were exposed to ozone levels that were nearly the same to the exposures occurring on farms throughout the East. Earlier, the researchers had exposed plants to very high concentrations of ozone, assuming that bio-chemical effects would be more easy to identify. Britz found that plants react differently to low-level ozone exposure than to unrealistically high levels. He says that the responses observed at high-end treatments may not be reflective of physiology at ozone levels near ambient. The present method may give a much better data.

The researchers have found that significant morphological effects -- changes in leaf growth and development -- as well as reduction in yield in sensitive lines of soybean can be observed under conditions in which photosynthesis and photosynthetic carbon metabolism are not affected.