For Indian researchers, a field trip to the South Pole may no longer be a directionless exercise. The country's scientific institutions that have been dispatching short-term study teams to Antarctica will henceforth be required to commit themselves to projects of longer duration 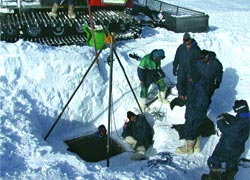 For Indian researchers, a field trip to the South Pole may no longer be a directionless exercise. The country's scientific institutions that have been dispatching short-term study teams to Antarctica will henceforth be required to commit themselves to projects of longer duration. This development arises from the growing realisation that brief programmes are hardly able to yield any results. The researchers too are not in a position to chalk out comprehensive plans, hamstrung as they are by the uncertain future of their projects.

Since the first expedition in 1981, India has been sending scientists to the icy continent for conducting research in a variety of fields such as geology, geomagnetic studies, atmospheric sciences, biology and environmental sciences. As many as 60 scientific institutions and universities have been involved in the expeditions. Prominent among them are the Geological Survey of India, India Meteorological Department, National Physical Laboratory, National Geophysical Research Institute and the Indian Institute of Geomagnetism. While these bodies have been part of each annual expedition, there are many other others which undertake research in the continent from time to time.

P C Pandey, director of the Goa-based National Centre for Antarctic and Ocean Research (ncaor) -- the nodal agency for coordinating Indian scientific activities in the region -- reveals: "From now on, Antarctica projects will be cleared for durations stretching over three to five expeditions." This has been made possible because for the first time the Union cabinet has given the go-ahead for Antarctic expeditions stretching up to five years.

According to the National Council of Applied Economic Research's (ncaer) recent evaluation of the Indian Antarctic Programme (iap), the country's studies in the continent would be "sketchy" unless participating institutions dedicated themselves to the task. "They (the projects) may satisfy individual scientists or organisations by showing their participation in the Antarctic expeditions or (helping them get) a doctoral degree, but the (iap) will suffer," the ncaer study observed.

"Proper follow-up was lacking in most of these projects," contends S Shivaji, deputy director of the Centre for Cellular and Molecular Biology (ccmb), Hyderabad, who was also the chairperson of a standing committee on biology and environmental research in Antarctica. Shivaji feels that since they are strapped for funds, most universities may not be able to carry on with the programmes unless financial support comes from elsewhere.

U R Rao, former chairperson of Indian Space Research Organisation, avers that there is a need to sharpen "our research focus" in Antarctica. In 1996, Rao had headed an expert group for delineating a 10-year work profile for research in the region.