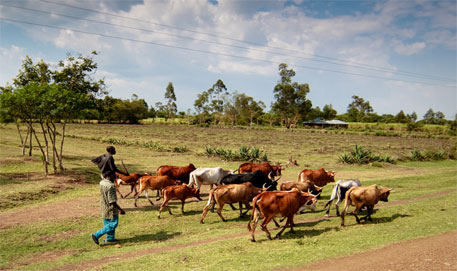 For the first time, scientists have quantified the relationship between the health of farmers and livestock in sub-Saharan Africa. Before this, researchers had only suspected a link.

The study, which appears in the journal Plos One, offers a comprehensive view of human health through the lens of animal health.

In most rural households in sub-Saharan Africa, healthy livestock play a vital role in averting the burden associated with zoonotic diseases.Besides this, they also meet nutritional and socio-economic needs, the study says.

After tracking 1,500 rural households and their livestock in 10 villages in western Kenya for a year, researchers found a strong link between the number of illnesses among family members in a particular household and the number of livestock sicknesses and deaths in that family.

Researchers relied on hut-to-hut visits and free hotline numbers to call on farmers for the study.Researchers obtained data on 6,400 adults and children, along with more than 8,000 cattle, 2,400 goats, 1,300 sheep and 18,000 chickens.

The analysis revealed that for every 10 cases of animal illness or death, the probability of human sickness in the same household shot up by 31 percent.

“Our findings help to understand, in quantitative terms, the complex pathways that link livestock health to the health and welfare of the humans who own them,” ThumbiMwangi, an infectious disease epidemiologist at the Washington State University’s Paul G Allen School for Global Animal Health, was quoted by EurekaAlert as saying. EurekaAlert is a science news site.

“It’s important because an estimated 300 million people living in sub-Saharan Africa depend on livestock as their main source of livelihood and nutrition,” he added.

There are three pathways linking human health with that of animals.There is firstly the socio-economicfactor where healthy and productive livestock result in higher household incomes and increased access to education and health care.

The second is the nutritional factor where healthy livestock increase access to animal-source food.This, in turn, lowers malnutrition and disease.The third factor is zoonotic, where healthy livestock are less likely to transmit diseases. However, the negative side of zoonotic diseases must also be considered, according to researchers.

What is still not known is whether animals suffering from ailments are passing the pathogens directly to the people who own them. It is also possible that the environment in which they live fosters propagation of pathogens.