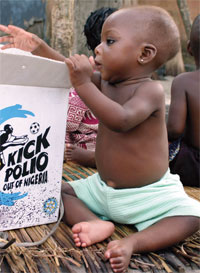 Authorities in Nigeria’s northern state of Kano have pressed criminal charges against two radio journalists in connection with their criticism of local officials’ handling of a polio vaccination campaign.

Yabuku Musa Fagge, presenter for private broadcaster Wazobia FM, and Mubarak Muhamad Sani, a reporter for the same station, face charges, including criminal conspiracy, abetment, defamation of character, obstruction of a public officer carrying out his duty, intentional insult, and incitement to violence, according to local journalists and news reports.

The charges stem from a February 6 radio show in which Fagge accused local officials of abusing their power by forcing the public to immunise children against polio. Police allege that the broadcast led to a February 8 attack in which gunmen shot nine health care workers administering polio vaccines. Nigeria is one of the only three countries, along with Pakistan and Afghanistan, still considered to have endemic polio, according to international news reports.

Fagge and Sani denied the charges.