Can you really be poisoned by green or sprouting potatoes?

Many people think of potatoes as root vegetables because they grow underground like carrots, parsnips and other root crops. But in actual fact they are a type of “modified stem” known as a tuber 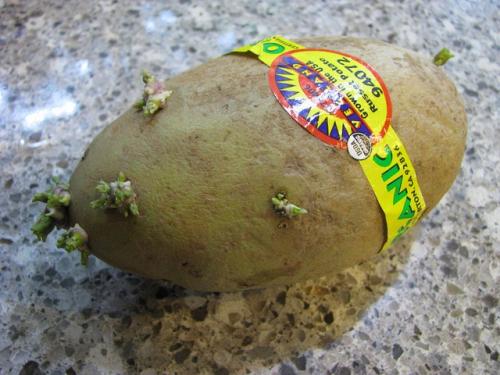 We’ve all been there, you buy some potatoes, pop them in the cupboard, and then promptly forget about them. Then the next time you open up the cupboard, you discover said potatoes have started sprouting and now resemble an alien lifeform. So what do you do? Do you cut off the sprouts and bring them to the boil, or chuck them in the bin deeming them inedible?

You may have heard horror stories of people being poisoned by sprouting potatoes, but is there actually any truth to any of these tales? To answer this question, first we need to know a little bit about what a potato actually is in terms of its botanical structure.

Many people think of potatoes as root vegetables because they grow underground like carrots, parsnips and other root crops. But in actual fact they are a type of “modified stem” known as a tuber. These are compacted, swollen stems which are produced underground and remain there when the “parent plant” (the old plant that produced this year’s crop) has died down. This allows the plants to survive through the cold winter period because the tubers are deep below the soil surface where they are protected from frost.

Most of us are aware that potatoes are high in carbohydrates. This is because they need enough stored food to survive the winter. Food in the form of sugars is created by photosynthesis – which you will remember from school biology classes is the process by which plants use energy from sunlight to produce glucose (or sugars) from carbon dioxide and water.

While some of this energy is used up by plants straight away, perennial plants – those that live for more than two growing seasons – will store energy for the onset of growth the following spring. They need this food to be able to generate sufficient energy to grow up to the soil surface and grow new leaves before they can start to photosynthesise. In other words, potatoes contain the “packed lunch” that will keep them alive through the winter and produce the first flush of growth.

If you look closely at a potato you will notice the “eyes” – the little spots you see when looking at the skin or peel of a potato. These are in fact the nodes of the stem. And on a normal stem above ground these give rise to new leaves and branches. These form the shoots that start to grow on potatoes if you leave them in the cupboard for too long.

They are triggered into growth by the warmth of your house and if they are exposed to any light this will accelerate the process. This is why potatoes should be kept in a cool, dark place for maximum shelf life.

But what about when they turn green? Most of us are aware that we shouldn’t eat green potatoes. But why?

Exposure to light triggers certain physiological reactions within the tuber. The production of chlorophyll triggers the green colour – this is not at all harmful and indeed contains high quantities of beneficial minerals such as iron. It is also what creates the deep green colour found in all edible leafy green vegetables.

But light and warmth also triggers the production of Solanine – a chemical which can cause symptoms of poisoning in humans if ingested in large quantities. Symptoms include nausea, diarrhoea, vomiting, stomach cramps, burning of the throat, headaches and dizziness. This chemical tends to be concentrated under the skin of the potatoes alongside the chlorophyll and also in the newly developing shoots. So it may be advisable not to eat green potatoes or those that have begun to grow shoots.

Of course, you can remove the green area of peel and the shoots which will reduce any chance of a toxic reaction but there can still be a bitter flavour to potatoes that have begun to grow. The start of the growth process will also begin the assimilation of the sugars and vitamins present which means that the potato is now less nutritious, too.

Having said that, when stuck for something to eat, I have knocked small shoots off potatoes and peeled off any green bits many a time. I just wouldn’t eat any with extensive shoot growth and dark green patches. Instead, these can be planted out to grow a new batch of potatoes.

They won’t be certified virus-free like a bought “seed” potato, but they should provide you with a small bounty later on. In winter, they will also need a frost-free environment to grow. And if you have no space to grow them and really hate waste then remove the shoots and green skin, boil them and chop them up and feed them to the birds. They’ll be delighted.