Positive cases in the state are rising and may spike in the days to come, data shows 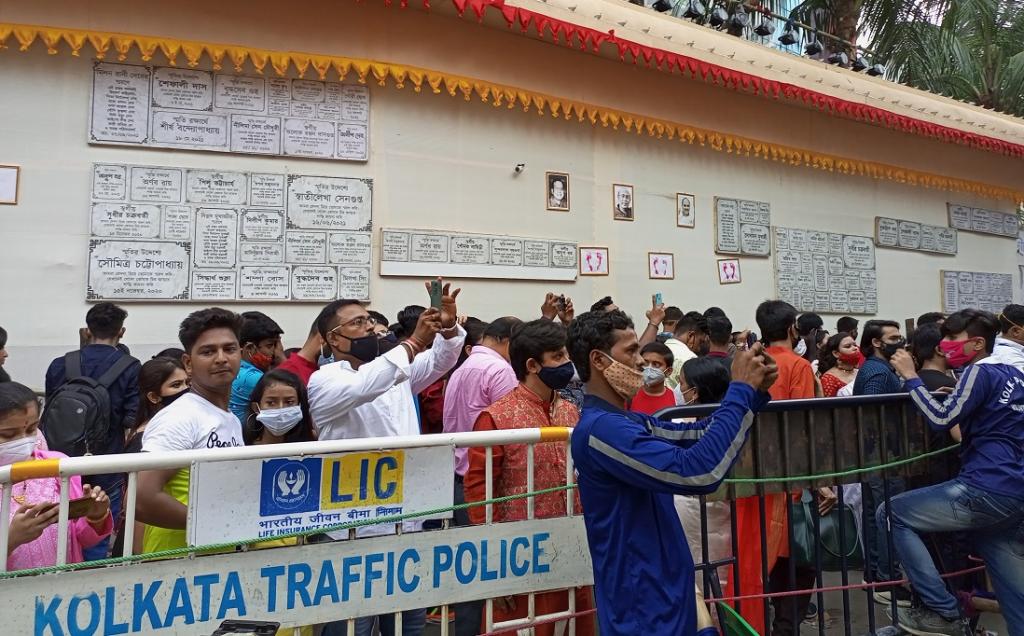 Crowds at a Puja pandal in Kolkata. Photo: Jayanta Basu

West Bengal seems to be moving in the opposite direction from the rest of India as novel coronavirus disease (COVID-19) cases are on the rise in the state, in contrast to other parts of the country.

Experts have warned that West Bengal will see a spike in the coming weeks as COVID-19 norms have been flouted in the recent Durga Puja celebrations.

Members of the global advisory committee, set up by the state government, requested the administration on October 21, 2021 to be more vigilant during the forthcoming Diwali/Kali Puja celebrations in the state.

Some 867 new cases were recorded in the state October 20, the highest for a day in the last four months. The last time the number was this high was July 21, when the statistic was 869.

The total number of affected per day was around 700 during the whole of August and September. The positivity rate — the percentage of COVID-19 positive patients within those tested — was less than two per cent.

However, the statistic started to increase steadily once people began to shop in increasing numbers during Puja days. The positivity rate is currently hovering around 2.5-3 per cent.

Sources from the state health department told this reporter about the current positivity rates in various districts. These include:

A senior physician-cum-administrator of a district hospital, said: “The testing rate is extremely low. We too were used to receiving sample numbers in single digits around Puja. Still, the positivity rate was significant. We expect the number to go up significantly if the number of testing gets increased.”

Night curfew is back in place in the state since October 21, on the orders of Harikrishna Dwivedi, the chief secretary of state. He also stressed on increasing COVID-19 testing and vaccination in a recent meeting with various government officials.

The impact has been particularly high on Kolkata, with the positivity rate currently around 3.5 per cent. The number of affected per day also has more than doubled in Kolkata during the week October 14-20, rising from 102 to 244, according to government data.

Millions had hit the streets during Puja celebrations in Kolkata, flouting COVID-19 norms.

Sri Bhumi, a Puja run by a minister in the ruling Trinamool Congress-led state government, had to be closed down to crowds during the festivities. This was after its pandal’s recreation of Burj Khalifa in Dubai attracted huge footfall. Several other signature Puja pandals (marquees) also drew crowds reminiscent of pre-pandemic days.

An analysis by the Indian Institute of Mathematical Sciences shows that, between September 29 and October 18, the R value in Kolkata – 1.06 – was the highest within India’s urban centres.

In contrast, during the first fortnight of October, Delhi’s R value stood at 0.9; Mumbai at 0.94; Pune at 0.96; Chennai at 0.98 and Bengaluru at 1.04. R value signifies how many people are getting infected from one affected person. Values higher than 1 suggest that infection is on the rise.

Sitabhra Sinha, a scientist based in Chennai, who regularly analyses R value, told this reporter:

The value is normally related to the events about two weeks prior to the assessment. Hence, one can possibly link it to the pre-Puja congregations, be it shopping or otherwise. The analysis during late October is likely to show how much Puja exposure has contributed to the trend.

Sinha pointed out that since late July, Kolkata’s R value had consistently remained over 1, indicating the high spread of infection in the city.

“Though the number of infected has increased post-Puja, most of them are asymptomatic,” Tapan Mukherjee, health advisor to the Kolkata Municipal Corporation, said.

“The COVID-19 ward, which hardly had patients a few days back, is starting to fill up,” pointed out Arup Haldar, a pulmonologist and COVID-19 specialist, associated with a frontline private hospital in the city.

All major doctor associations have recently written to the Calcutta High Court, urging it to take ‘suo motu cognizance’ of the violation of its order regarding observance of COVID-19 norms during the just-concluded Puja.

… Even after the warning stroke of your Hon’ble Court, the people at large continue to gather around the Puja pandals, flouting all the Covid-appropriate protocol … unwarranted public gathering … has reached its peak now …

The letter mentioned that “alarmingly, the COVID-19 scenario of our state has also rapidly deteriorated during this period” and added that “if the situation is not controlled even at this stage … people would (have to) run after oxygen and frantically search for hospital beds for themselves and their relatives”.

Another public communication from doctors to the administration, which has been circulated among people, has expressed “deep worries” about the way all science-driven COVID-19 protocols were flouted during Puja with the support of political leaders and a reticent administration.

It added that political parties, the administration and government would have to take the blame if another major pandemic surge hit.

“We seem to be beckoning the third wave,” Manas Gumta, a physician and secretary of the Association of Health Service Doctors told this reporter.

The health experts from the advisory committee set up by state government are also apprehensive of the impact created due to the all-round laxity during Puja.

“There was all-round laxity during Durga Puja, which is likely to push the situation out of bounds unless we immediately re-impose strict COVID-19 norms within people and increase the rate of testing and vaccination in the state,” Sukumar Mukherjee, a senior physician in the state and member of the global advisory committee, said.

“During yesterday’s committee meeting, I suggested that the testing may be increased to 50,000 and the vaccination to a million daily,” Mukherjee told this reporter.

Abhijit Chowdhury, a senior doctor and another member of the committee, said “the daily number of positive cases may increase up to 5,000”. But he expressed hope that the situation would not be as bad as the second wave as the state had already carried out a relatively high number of vaccinations.