COVID-19 warriors: How one man saved a newborn abandoned by a travelling migrant 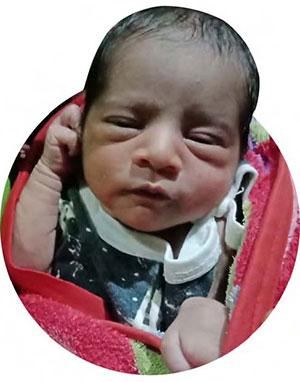 “In the 30 years of my career, I have not seen anything as heart-wrenching as this,” said Abul Kalam Azad, a social worker who works with the economically backward tribal communities of Sundargarh district in Odisha.

On May 16, a migrant worker walking to her village in Maharashtra’s Ankola district amid the novel coronavirus disease (COVID-19) lockdown delivered a child on the roadside and then abandoned him, so that she could continue her arduous journey home, with one less burden.

She was part of a group of eight, perhaps from somewhere in Jharkhand. The group had already walked non-stop for seven days and reached Bisra block, which acts as a transit corridor for people from Bihar, West Bengal, Jharkhand, Odisha, Chhattisgarh, Madhya Pradesh and even Maharashtra. The woman was hungry and in labour. She halted at San Nuagan village, begged a shopkeeper for bread and asked for direction to a hospital.

“But getting admitted to a hospital without a COVID-19-negative certificate and Aadhaar card is difficult, particularly if she is a migrant worker with no proof of identity or residence,” Azad said.

The woman delivered the child at a hospital gate without any help. When the child was born, no one wanted to touch them fearing they may have COVID-19. She too did not want to carry the child along in her exhausting journey. She informed a woman nearby that she had left the child on the roadside and resumed her walk.

“When we got to know about the incident, we rescued the child, conducted a thorough medical checkup and took him to our government-recognised children’s home called Disha,” Azad said.

“The next day, with the help from the local administration, we managed to trace the mother. After several rounds of counselling and assurance that she would be sent home on a vehicle, the woman accepted the child,” he added.

But not everyone is as fortunate. There are 200 to 300 migrant workers who cross Bisra everyday on foot or on bicycle. Most work as domestic aides or as daily wagers at brick kilns, mines or shops. They are hungry and say people are reluctant to offer them food or shelter, or even touch their bicycle for repair.

“They look so exhausted that I doubt if they would survive the journey. We mobilised some youth to grease their bicycles, repair punctured tyres and offered them food. We have also made cloth masks for them,” Azad added.

Last week, Disha arranged transport for six people who had reached Bisra after cycling non-stop from Pune, surviving only on puffed rice. They were headed for Purulia district in West Bengal, which is another 300 kilometres.