Nearly 44% of respondents from India reported challenges in meeting their daily expenses during COVID-19 lockdowns; situation grim across South Asia 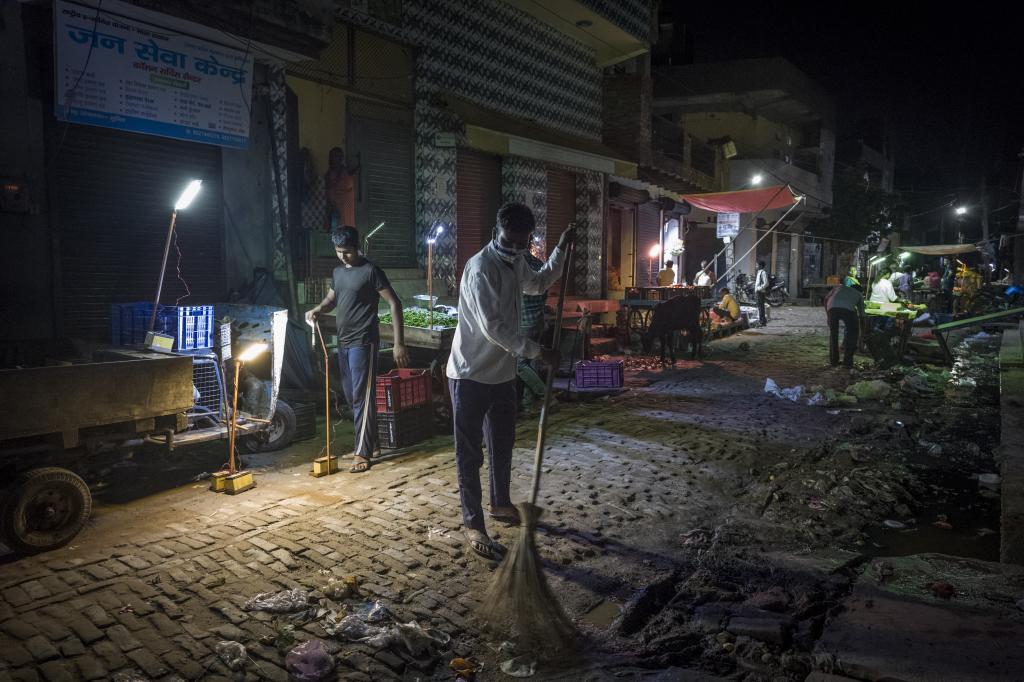 Vishal Jeenwal (26), a street sweeper, cleans the area where they have set up in Geetanjali colony, Loni, Ghaziabad, India. Photo: WaterAid / Anindito Mukherjee

As many as 40 per cent of sanitation workers interviewed by WaterAid, an international non-profit, in India between May and June 2020 lacked handwashing facilities during the peak of the novel coronavirus disease (COVID-19) lockdowns. Nearly 44 per cent reported challenges in meeting their daily expenses as they were out of work or were not paid on time.

The situation was equally grim in other South Asian countries such as Bangladesh and Nepal, as well as Burkina Faso, Nigeria and Tanzania.

Ahead of the World Toilet Day on November 19, 2021, WaterAid called for governments, local authorities, employers and the public to protect, support, respect and invest in sanitation workers November 17.

It urged governments and local bodies to ensure their safety by providing regular training and access to personal protective equipment, and by developing legislation, policies, guidelines, research and innovations.

It requested them to improve their working conditions through access to health insurance, social security and decent wages.

Sanitation workers of these countries were surveyed by WaterAid who worked on the frontlines through the pandemic, but were denied adequate personal protective equipment, suitable training, financial support or legal protection.

The findings of the study, ahead of the World Toilet Day on November 19, showed:

Stigma and discrimination often faced by sanitation workers became more pronounced in some countries during the lockdown, the study found. In some cases, however, workers received more recognition from their employers.

In other cases, workers in Bangladesh reported concern and pressure from neighbours not to return home after work; those in Nepal were asked by their landlords to vacate their homes. A study by the Bangladesh Faecal Sludge Management Network showed 48 per cent of waste workers interviewed had reduced income during the pandemic.

Down to Earth had earlier reported how thousands of sanitation workers in Kathmandu fought the pandemic unarmed — without gloves and masks.  More than 0.7 million workers are involved in labour work in Nepal. Of them, more than a lakh are engaged in health-related work.

According to a 2020 WaterAid study:

In India, 95% of respondents had some form of PPE and masks. At least 20 per cent either bought masks or made them from clothes. More specialised PPE, however, was not available for healthcare workers.

Several media reports in 2020 had flagged that hospital workers, the most vulnerable to the virus, did not have access to PPE needed to carry out their work.

Insurance, similarly, was an elusive territory. In India, only 35 per cent of the respondents said they were covered by an insurance plan from their employers. The breakdown by contract type is 70 per cent among permanent workers, 36 per cent among contractual workers and 0 per cent among informal workers, the study stated.

In Nepal, 42 per cent of the respondents reported having health insurance — with half of them getting coverage after the pandemic hit.

No cases of workers with health insurance were found in Pakistan and Bangladesh.

The pandemic-induced lockdowns also fanned casteism at both formal and informal workplaces.

Vishal Jeenwal (26), a street sweeper belonging to Valmiki community tried to find office work for better pay. He, however, went back to cleaning when he was allegedly harassed by employers ‘because of his caste’.

He told WaterAid: “They said that someone like me could never succeed in any other job.  I tried several other jobs, but finally, out of desperation, I went back to doing what I’d seen my family do all their lives — cleaning.”

“They don’t want to come near me. I have always been socially distanced by my employers,” said Kamlesh Taank (55), who cleans  dry latrines in a town near the Indian capital, Delhi.

Tim Wainwright, WaterAid chief executive, said it was unacceptable that so many sanitation workers operate without the support and safeguards they need.