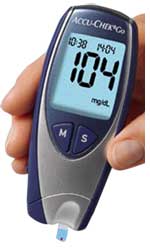 An early warning system in the making to prevent diabetes

with over 45 million diabetics in the country, India is called the diabetes capital of the world. Doctors advise eating healthy and exercising for an hour daily to keep obesity at bay--a major risk factor. But that may or may not work, especially for people in the high-risk category. What the country needs is an early warning system.

Adam Tabak and other researchers at the department of epidemiology and public health, University College London, UK, say it might just be possible to tell if a person will have diabetes three to six years later--his blood sugar levels will be rising fast.

Tabak took help from the Whitehall II study, initiated in the UK in 1988 (see: A tradition). Under the study, over 10,000 people underwent a glucose tolerance test between 1991 and 1994.Blood samples were collected after a night of fasting and two hours after breakfast. Right after a meal the blood sugar level is high and insulin is released to direct sugar to the muscles to be broken down for energy. Two hours after a meal normal sugar levels are restored.

Tabak's team repeated the tests on 9,000 participants of the Whitehall II study between 1997 and 1999 and from 2002 to 2004. In the intervening periods, the people were made to fill out questionnaires, to know their diabetes status. When t he results were compared, the team found 505 diabetics. They found that from 13 years to three years before the final diagnosis, in 2004, there was a gradual increase in fasting sugar levels for both diabetics and non-diabetics. But the increase was very high for diabetics, both for fasting and post-eating sugar levels. Insulin sensitivity also decreased much faster in diabetics. Fasting sugar levels in diabetics rose from 98.5 mg/decilitre 13 years before final diagnosis to 104.2 mg/dl three years earlier to 133.2 mg/dl in 2004. In case of non-diabetics the increase in fasting sugar was from 94.68 mg/dl to 95.58 mg/dl during the 13 years of the study.

Three to six years before one turns diabetic is the unstable period. The authors of the study said research is on to identify the symptoms for this period. Until that can be done regular follow-ups is a must. "Indians have a high insulin resistance. So they become prone to diabetes (in their 30s) almost 10 years before people in the West," said Anjana Bhan, endocrinologist at the Max Super-Speciality Hospital, Delhi. "This study tells us that preventive health check-ups should start earlier in our country, perhaps when people are in their 20s."

The paper was published in the June 8 issue of Lancet.