Over a third of the country’s total deaths of 315,235 occurred in May 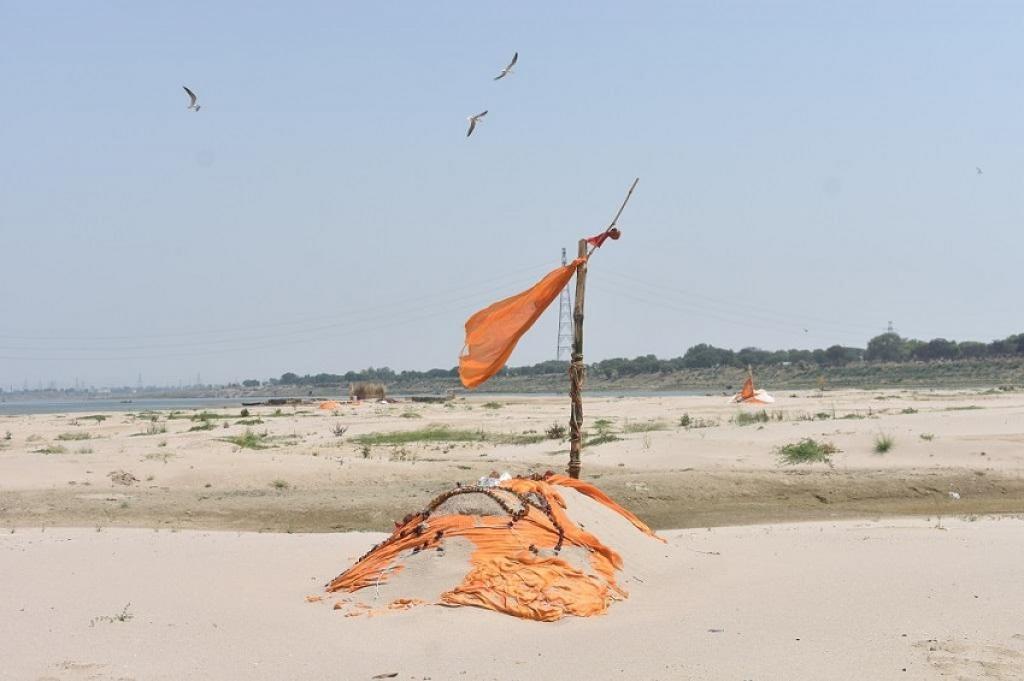 Graves marked by saffron flags on the Yamuna riverbed at Basvaar village near Prayagraj in Uttar Pradesh. Photo: Gaurav Gulmohar

While dystopian destruction swept over India in April, May has been the most tragic month as the country lost over 100,000 people due to the novel coronavirus disease (COVID-19). It means the month — which still has a few days to go — is alone responsible for a third of the country’s total death count of 315,235 (as on May 26, 2021). In contrast, India lost 48,926 people in April.

India had also recorded almost 7.8 million new cases between May 1 and 24, the highest-ever in a month. The only consolation is that the daily case count has been on a downward trend since May 8, the last day when the country recorded more than 400,000 cases in a day.

Though a lower case count towards the end of May might seem to indicate that we can finally take a breath of relief, it is accompanied with a high case fatality rate (CFR), the ratio between confirmed deaths and cases. This means while fewer people are being infected by novel coronavirus disease (COVID-19), a higher percentage of COVID-positive people are dying.

The high CFR could be the result of a bigger crisis: In May, rural districts for the first time this year recorded more cases and deaths.

Lack of awareness and reluctance to submit to testing and treatment make the rural population more susceptible to COVID-19. The added challenge is that official numbers, especially in rural districts, are misleadingly low — owing to limited testing and delayed results. On May 21, 382 districts had more than 10 per cent positivity rate. And 77 per cent of these districts were rural.

Positivity rate is the percentage of people who test positive for the virus among those who have been tested overall. A high positivity rate indicates that testing is relatively limited to people with high suspicion of COVID-19 and may miss new chains of transmission in the community.

A low positivity rate, in contrast, means testing levels are sufficient for the scale of the epidemic and surveillance is penetrating the community enough to detect any resurgence, according to the website covidtoday.in.

The World Health Organization recommends that the daily positivity rate be below five per cent for at least two weeks before relaxing public health measures. A positivity rate of 10 per cent is considered acceptable.

India’s second wave started in February 2021 with a surge in cases in Kerala (38 per cent) and Maharashtra (36 per cent). In March, Maharashtra emerged as the epicentre and alone accounted for almost 60 per cent of the new cases. It was followed by Kerala (six per cent) and Punjab (five per cent).

There were four other states that contributed more than five per cent of the month’s caseload. They were Karnataka (7.34 per cent) and Delhi (seven per cent), Kerala (6.29 per cent) and Chhattisgarh (5.6 per cent).

In May, Maharashtra’s share has further dropped to 13 per cent of the total monthly cases and it was now closely trailed by Karnataka (12 per cent), Kerala (10 per cent) and Tamil Nadu (nine per cent). Three other states contributed more than five per cent of May’s caseload: Andhra Pradesh, West Bengal and Uttar Pradesh.

A similar shift can also be seen within the worst-hit states. Maharashtra, for the first time in May, recorded more cases in rural districts (61 per cent) than the urban districts. In April, the rural share was 42 per cent. In Karnataka, the share of rural districts in May stood at 49 per cent, up from 32 per cent in April.

In the wake of the misinformation crises spread through the information and communications industries and in the interest of transparent and easy access to public information, we have added this section about the source of the data used to arrive at the projections and analysis. We are conscious of our responsibility as journalists to use genuine data and transparently share it with our readers.

The government has not released district-level data since the beginning of May 2020. The total case count then was 4,000; it is now over 27 million now. In the absence of official numbers, we turned to data compiled by How India Lives — a repository of public data — and used Census 2011 and state websites to segregate 709 districts into urban and rural (those with more than 60 per cent rural population).

The analysis is based on district-level numbers for all states / Union territories, though partial data is available for Andaman and Nicobar, Assam, Goa, Manipur and Telangana.