A radical new approach to curing girls obsessed with their figures 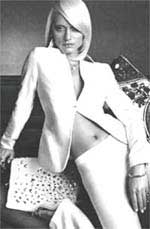 for reasons that are unclear, some people especially young women develop potentially life-threatening eating disorders called bulimia nervosa and anorexia nervosa . People with bulimia , indulge in eating binges (episodes of eating large amounts of food) and purging (getting rid of the food by vomiting or using laxatives). People with anorexia, called anorexics, severely limit their food intake. About half of them also have bulimia symptoms. There is no prescribed treatment for the two conditions. But, scientists have now found that the best therapy for these disorders could be provided by specially-trained parents.

The hype over events such as fashion shows and the resulting publicity, fame and money has created a tremendous craze among young girls to be figure conscious. Between 1922 to 1999 winners of Miss America pageants showed a height increase of 2 per cent and a weight decrease of 12 per cent setting a global trend for thin is beautiful.

Defects in key chemical messengers in the brain may also contribute to the development of these disorders or their persistence. Many girls frequently find their condition progressing towards bulimia where they go on a binge and vomit as many as 20 times a day.
Most people find it difficult to stop their bulimic or anorexic behaviour without professional help. If untreated, the disorders may become chronic and lead to severe health problems, even death. Thousands of teenagers die every year. There are no medicines approved specifically for bulimia or anorexia , but several, including some antidepressants, are still being investigated.

Early treatment is vital and can be life-saving. As the disorder becomes more entrenched, its damage becomes less reversible. For years, parents of anorexic girls have been told to avoid arguments over food and give up their unsuccessful battle for control over their daughters' bodies. But the trend is changing. One such couple walked into the Children's Hospital of Michigan recently with their bone-thin daughter. Patricia T Siegel, a pediatric psychologist at Children's Hospital in Detroit, decided to try out a new therapy with food as a medicine which the parents had to administer under the guidance of doctors.

Their child had starved herself down to 39 kg. To save her life, therapists put her parents in charge of preparing and dispensing meals planned by a dietician. The kid was never forced to eat -- that was the girl's responsibility. Siegel trained the parents how to use behavioural incentives to subtly encourage her to eat. And when she tipped the scales at 45 kg -- not an easy task with a girl who was often hostile and deceptive -- Siegel coached the parents to hang on. "The therapist needs to convey to the parents that he or she will see them through this and keep them in control of their daughter," Siegel says. Once their daughter achieved her target weight of 52 kg, the focus of therapy shifted gears. Siegel began to concentrate on family issues that would keep the child healthy.

The use of parents as tools in treating adolescent anorexia , a radical new approach, was presented by Siegal at the Ninth International Conference on Eating Disorders held in New York city this summer. The conventional wisdom has been that family conflict sets the stage for teenage eating disorders, so therapists usually counselled parents to steer clear and allow teens to take charge of their recovery. But a growing number of therapists now feel that specially trained parents are perhaps the most effective cure.

This approach to treating anorexia made headlines recently after Arthur L Robin published findings of a long-term study . Robin, a professor of Psychiatry and Behavioural Neurosciences at Wayne State University, and his colleagues studies 37 girls. Eighteen of them were treated in individual therapy sessions; their parents were counselled separately and told to give up cajoling or ordering their daughters to eat. The other 19 girls and their parents jointly with therapists who put the parents in charge of their daughters' eating. ( Journal of the American Academy of Child and Adolescent Psychiatry , December 1999).

The majority of girls in both groups responded well to treatment: 70 per cent reached their target weight. But the girls whose parents were trained to oversee their food gained weight faster and gained more weight. One year later, even more of those girls had reached healthy weights. It's true that family problems often contribute to anorexia , Robin says, but it's also true that parents can become a therapist's best allies.