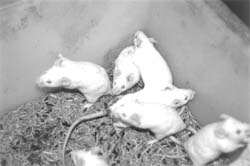 anybody who has tasted chillies deliberately or accidentally would know what it means to have your mouth on fire. A few years ago scientists discovered the reason. A cell surface protein that in cultured cells responds both to heat and to capsaicin, the active ingredient of chilli peppers. Now, scientists have demonstrated that mice lacking the receptor are less sensitive to high heat and other pain-inducing tests -- a finding that may aid in the development of new pain-killing drugs.

Neuroscientists Michael Caterina, David Julius and Allan Basbaum of the University of California, San Francisco and University of Wurzberg, Germany used genetically altered mice in which they had removed the receptor that responds to heat as well as capsaicin and the other so-called vanilloid compounds. The mice behaved normally in most respects but showed less sensitivity to high temperatures and drank capsaicin-laced water freely ( Science, Vol 288, No 5464).

Previous findings had strongly suggested that the so-called vanilloid receptor 1 ( vr 1) was important to experiencing pain. The receptor allows nerve cells to respond to two classic pain stimuli: heat and capsaicin, the active ingredient in chilli peppers. To prove that vr 1 also played a role in animals, the researchers produced a mouse that lacked the corresponding gene.

The mice behaved normally in most respects, but when the researchers injected capsaicin into their hind paw -- a treatment that causes normal mice to lick and shake the tender paw they barely reacted. They also happily drank water mixed with capsaicin, which normal mice took one sip, rubbed their snouts and stayed clear of. Furthermore, the mutant animals tolerated high heat better, including having their tails immersed in a hot water bath and their paws put in contact with a hot plate. The animals eventually reacted to both tests showing that sensitivity was only lessened but not eliminated. This suggests that other heat sensing channels play a role as well.

In another test mustard oil was used. The oil painted onto the paws of normal mice causes them to become inflamed and very sensitive to heat -- just as sunburned skin is seared by warm water or sunshine. But in mice lacking vr 1, the oil did not enhance the response to heat, although the animals still displayed the hypersensitivity to touch that develops in inflamed tissues.

These results show that the receptor is not only "an essential part of vanilloid sensitivity" but also plays an important role in several other kinds of pain, says David Julius.